After more than two decades since its last running, the Galveston Marathon returned to the streets and seawalls of this Texas port city in 2012 for a Mardi Gras-themed revival of a race that takes runners through the city’s historic Strand district and along the highways that look out onto the waters of the Gulf of Mexico, which runners will be able to see for a several miles toward the end of the race.

From the race starting and finish line area near Galveston’s Stewart Beach Park, the out-and-back course takes runners in the half marathon along a single loop out towards Seawall Boulevard, which was built in the early 20th century to protect the city and its inhabitants following the historic Galveston hurricane of 1900, which cost an estimated 6,000 to 12,000 people their lives.

The race organizers note that there is a 6 hour time limit for the full marathon; however, the half marathon has no time limit, making the event a good choice for runners and walkers alike, including first-timers.

More than 1,200 runners crossed the finish line in all three races combined in 2016, including more than 800 finishers in the half marathon alone. For runners looking to qualify for the Boston Marathon, the Galveston Marathon is a USA Track and Field-certified course and a Boston Marathon Qualifier course. 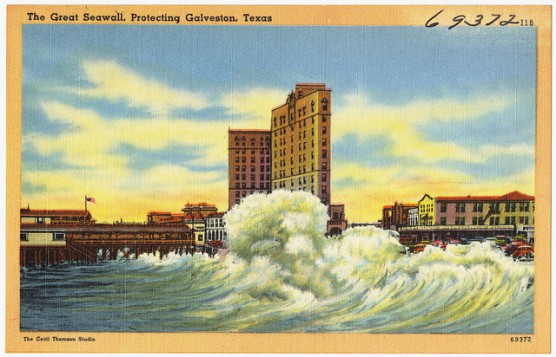 Nestled along the Texas Gulf coast here on the northeastern tip of Galveston Island, just over 50 miles southeast of downtown Houston, the city of Galveston typically experiences milder, drier weather in the winter than in the summer, when hot and wetter weather are the norm.

In February, temperatures average between 47°F and 63°F — on the day of the race (Feb. 26), the average low is 54°F and the average high is 61°F — while rainfall totals average just over 2.6 inches, making February Galveston’s second-driest month of the year.

See the race route map for the Galveston Half Marathon here.

To reserve your spot in the 2023 running of the Galveston Marathon, Half Marathon or Cupid 5K race, register online at RunSignUp.com here.

Ever run in the Galveston Half Marathon? Share your impressions here, or post your review in the Comments box below.