The Gusher Marathon, Half Marathon & 5K

If you’ve ever seen the James Dean & Elizabeth Taylor classic film “Giant,” or even more recent movies like Daniel Day-Lewis’s “There Will Be Blood,” then you have an idea of the romance of a place like Beaumont, Texas, whose Spindletop oil field set the stage for America’s movement into the petroleum age after its discovery in 1901.


Though the filed has long since ceased to be an oil producer, today it is on the National Register of Historic Places and serves as the inspiration for the city’s The Gusher Marathon, Half Marathon & 5K.

The course for the half marathon, like the full marathon and the 5K, starts and finishes at the Montagne Center of Lamar University, the city’s flagship state university. From there, runners follow an out-and-back route through the streets of the city, which lies just north and west of Sabine Lake and Port Arthur.

The route includes long stretches in roughly the middle of the race along the city’s Martin Luther King Jr. Parkway, as well as stretches through downtown, just within view of Riverview Park, overlooking the waters of the Neches River flowing by to the east of the city.

After a few twists and turns through Beaumont’s downtown district, runners then follow Park Street, College Street and Wall Street until they turn back onto the MLK Parkway, which they take back southward and eastward toward the Lamar University campus, back to the finish line at the Montagne Center.

Like much of this part of the state, most of the terrain for the race is flat, with the exception of some small hills between mile markers 3 and 5, and then again between the mile 8 and 10 markers.

The half marathon event in the race starts at 7:30 AM, and race organizers say they plan to allow the course to remain open for seven hours for all participants, to allow both runners and walkers to complete the race and receive an official finishing time. 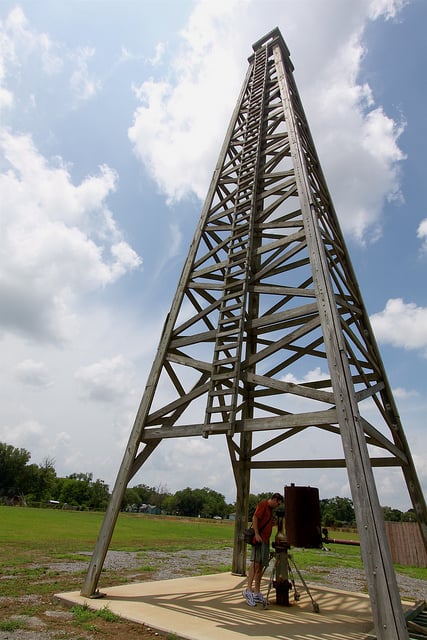 A replica of an oil well at the Spindletop Museum in Beaumont, Texas. (Photo by Roy Luck/flickr)

Located along the east Texas Gulf coast, roughly 87 miles east of Houston, Beaumont typically experiences very hot, humid and wet summer weather, and conditions in the early spring are thankfully milder than in the summer.

See the race route map for the Gusher Half Marathon here.

To reserve your spot in the 2018 running of Beaumont’s The Gusher Marathon, Half Marathon or 5K race, register online at RunSignUp.com here.

Ever run in the Gusher Half Marathon? Share your impressions here, or post your review in the Comments below.