La Porte By the Bay Half Marathon

Set for its 13th annual running, the La Porte By the Bay Half Marathon is set to take runners on what the race organizers say is “the highest off-the-ground half marathon in Texas” — and by that they mean the race route takes runners over a bridge that lies more than 170 feet above the water of Texas’s Galveston Bay.


Organized by the same running group that puts together the annual Seabrook Lucky Trails Marathon & Half Marathon in the spring each year in the nearby coastal town of Seabrook, the La Porte By the Bay Half will take runners on what is a largely flat route for the miles that take place on land, and one that features some big uphill and downhill stretches when runners are making their way over the Fred Hartman Bridge, which connects La Porte with nearby Baytown.

Runners start the race at La Porte’s Sylvan Beach Park, and from there they make their way through La Porte’s Five Points Town Plaza area, which today is a shopping and entertainment district on the site where the city’s Main Street once connected with four other streets.

The course also brings runners through the city’s renovated Main Street area and then join Highway 146, which takes them northward along the roadway toward the bridge, whose cable-stayed architecture is reminiscent of Charleston’s (S.C.) Cooper River Bridge.

Once over the bridge, runners head briefly into Baytown for the turnaround and then head back over the bridge into La Porte, and retrace their steps on the route back to Sylvan Beach Park for the race finish. Runners will need to be able to finish the race within the event’s four-hour time limit; following the four-hour cutoff, the streets will need to be re-opened to traffic.

Like its counterpart springtime race in Seabrook, the La Porte By the Bay Half Marathon will also benefit the locally-based nonprofit organization Bridge Over Troubled Water, which helps women, children and men who are victims of physical abuse or domestic violence of any kind with counseling and housing programs, crisis intervention, legal advocacy and much more.

More than 1,300 runners crossed the finish line at the event’s 5th annual running in 2014. Participants will need to finish the race within the 4-hour course time limit, and the race is limited to the first 2,000 entrants. 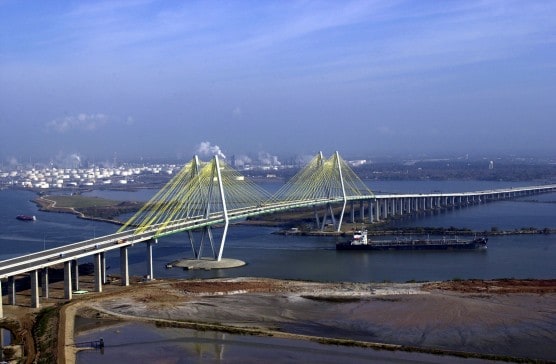 Nestled along the shores of Galveston Bay on the Texas Gulf coast, just under 30 miles east of downtown Houston, La Porte typically experiences moderately cool to mild weather as fall is transitioning to winter, with average monthly temperatures in November that range between 51°F and 71°F.

See the race route map for the La Porte By the Bay Half Marathon here.

To reserve your spot in the 2022 running of the La Porte By the Bay Half Marathon, register online at the event website by clicking here.

Ever run in the La Porte By the Bay Half Marathon? Share your impressions here, or post your review in the Comments box below.