Home to nearly 80,000 residents as well as the annual Great Texas Balloon Race, which draws thousands every July to watch hot air balloon pilots from all over the world fly brightly-colored and often cartoon character-themed balloons over the city, this East Texas city plays host to the 6th annual running of its half marathon as winter is giving way to spring in mid-March 2015.


Organized by the city’s Longview Running Club, which hosts races of several different distances throughout the year around the local area, the Longview Half Marathon & 5K race is also designed as a benefit for the Longview champter of AMBUCS, the nationwide community service organization that helps people with disabilities become more independent by providing specialized bicyles and tricycles.

Runners follow and out-and-back course for the half marathon, which starts on Airline Road and finishes at Longview’s Lobo Stadium, the home field of the Longview High School Lobos football team. From there, the route then takes runners on what is basically a counter-clockwise loop around the areas just north of the city, starting with a long, four-and-a-half-mile stretch northward along Eastman Road (Highway 259).

This long stretch features mostly gently rolling terrain until just between the mile 4 and mile 5 markers, where runners pass through what is probably the steepest uphill section of the race. After that, there’s a downhill and then runners reach the northernmost point of the course, passing by the mile 6 marker as they pass by Whitehurst Lake.

The final mile of the race unfolds along Judson and then brings runners back in to the Lobos football stadium for the race finish. Runners will have a three-hour time limit to finish the race. 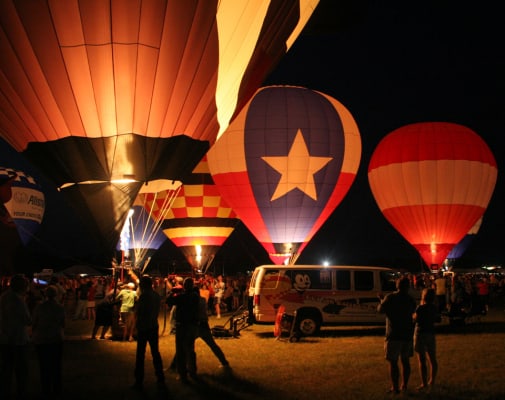 The Great Texas Balloon Race in Longview, Texas, taken in 2008. (Photo by Eaglegrafix/Wikimedia)

Located in East Texas, just 40 or so miles from the Louisiana-Texas state line and just over 120 miles east of Dallas, Longview typically sees March temperatures that average between 70°F and 45°F, while rainfall totals average just under 4.3 inches for the month.

See the race route map for the Longview Half Marathon here.

To reserve your spot in the early spring 2017 running of the Longview Half Marathon or 5K race, register online at GetMeRegistered.com here.

Ever run in the Longview Half Marathon? Share your impressions here, or post your review in the Comments box below.