Staged in the central Texas town of Waco to raise both awareness and funds for bone local marrow donation programs, the Miracle Match Half Marathon is actually several races in one — including a 13.1-mile half-marathon, a two-person half marathon relay, a 10K and 5K race.


Begun in 2004 by the Waco Professional Fire Fighters Association, proceeds from the race are used to help patients and programs at the local Scott & White Marrow Donor Program. In keeping with the spirit of the race’s founders, the course for the half marathon is challenging and includes a variety of different kinds of terrain.

From the half-marathon start in Waco’s Indian Springs Park, in the shadow of Waco’s signature suspension bridge, the course takes runners alongside the banks of the Brazos River for the first mile.

After passing underneath the highway, runners will head straight into the Cameron Park Zoo, a 52-acre habitat that over 1700 animals and 300 species from around the world call home. Runners will take in the sights of the zoo see some of the rhinos, tigers, sloths, and other animals that live in the zoo before heading out into the park.

Known as one of the largest city parks in Texas, Cameron Park is home to 20 miles of trails and a disc golf course alongside the zoo that runners will have already explored. The half marathon course takes runners outside the park briefly before returning to the park.

After a brief loop around nearby McLennon Community College, the course retraces most of its steps through the park (minus the zoo) before crossing the Herring Street bridge.

Once over the bridge, runners hit the final two miles of the race and run alongside the northern bank of the Brazos, running the trail alongside the river all the way to the suspension bridge, and the finish line. By the time they cross the finish line, the field of participants — which includes runners, walkers and wheelchair competitors — will have trekked across a course made up mostly of paved surfaces, but with also some natural surface and gravel trails thrown in.

Organizers plan to keep the course open for both the half marathon and 10K until 12:30 PM. In addition to the race events above, there are also a one-mile fun run for children and a Miracle Match Kids run for up to eighth-grade age children. 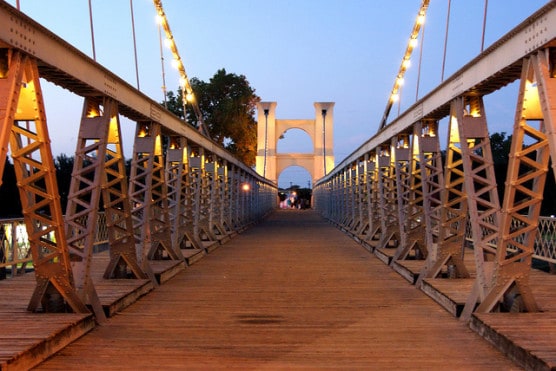 Located about 80 miles south of the Dallas-Fort Worth metropolitan area, the town of Waco typically sees cool to mild weather conditions in the late winter season, with occasional showers.

In January, temperatures average between 33°F and 57°F, while rainfall totals average just over 2 inches for the month. On the day of the race (Jan. 29), the average low is 34°F and the average high is 57°F.

To sign up for the winter 2023 running of Waco’s Miracle Match Half Marathon, 10K, 5k or Relay race, register online at Active.com by clicking here.

Ever run in the Miracle Match Half Marathon? Share your impressions here, or post your review in the Comments box below.