The end of fall 2022 brings the 15th annual running of San Antonio’s Rock ‘n’ Roll Marathon & Half Marathon, which — like its counterparts in San Diego and Virginia Beach — features live bands to cheer the runners, walkers and wheelchair competitors on every two miles along the entire 26.2-mile course, of which the first 13.1 miles is the course the half-marathoners run.


Designed to be a course with some hills in it — and to take runners in a northward direction toward the hilly northern sections of the city — the race takes runners by many of San Antonio’s most popular sights.

The race begins near the city’s Henry Gonzalez Convention Center, along Market Street, and then the course heads southwest briefly through downtown San Antonio, weaving through Dolorosa, Flores Street, La Trinidad Street, and East Travis Street (just a block away from the famed Alamo site).

After the first three miles, the course then heads north for the middle portion and a modest uphill climb toward Brackenridge Park, San Antonio’s largest park.

After completing the stretch of the course around the park, runners turn onto Broadway Street, where they run a straightaway for nearly two miles before making a few turns near Lockwood and Dignowity Parks before continuing south down Cherry Street.

Full marathoners continue further south down Cherry Street and into the southern (and flatter) part of the city.

The half-marathoners are almost home, however, and have only two miles more to go to the finish. After the turn on Cherry, half marathoners continue for about half a mile before turning right onto Montana Street. There, runners past the Alamodome before crossing the finish line at the Tower of Americas.

In addition to the full marathon and half marathon for individual runners, the race also hosts a two-person relay for the half marathon, for men’s, women’s and coed teams. 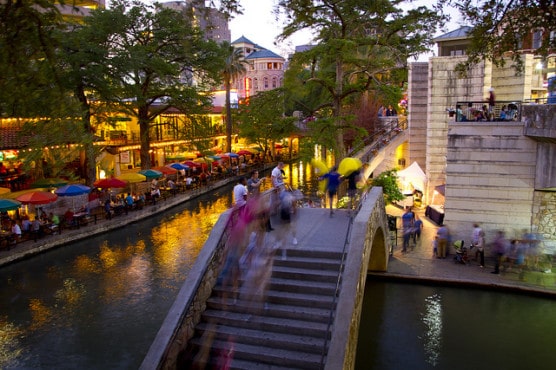 Known for its very hot summers and rainy spring and early summer seasons, San Antonio in the end of fall generally enjoys much milder and drier weather by comparison. In December, temperatures average between 41°F and 64°F, while rainfall amounts average just under 2 inches for the month.

To reserve your spot in the late fall/early winter 2022 running of the Rock ‘n’ Roll San Antonio Marathon, Half Marathon, Mini Marathon or Relay, register online at the race website below.