Run The Line Half Marathon

Described by organizers as fast and flat throughout, with only a few gentle hills scattered throughout the course, Texarkana’s Run The Line Half Marathon is a joint effort by the local nonprofit Partnership For The Pathway and the Team Texarkana Running Club, and takes about 500 runners and walkers each year along what one day will become a multi-use pathway for walking, running, biking and inline skating across the city.

Because it straddles the state line between Texas and Arkansas, this is one of those rare running events that takes participants literally across two states over the course of the race, hence the event’s title, “Run The Line.” For this race, runners start the 13.1-mile course in downtown Texarkana, at the corner of Pine Street and West Broad Street, and run a counter-clockwise loop through the city.

After about the first mile along Broad, the course turns left onto the Nix Creek Trail, which takes runners off-road and onto the trail’s 10-ft.-wide paved surface.

Once on the paved trail, runners then follow Nix Creek northward for the next two to three miles, running along the tree-lined pathway until reaching Pinson Drive, where the field exits the pathway and runs back onto city streets. Participants turn onto West 48th Street and then south onto Jefferson Avenue before turning again, west onto Arkansas Boulevard, which takes them on a straightaway toward Spring Lake Park.

At Spring Lake Park, runners follow the trail that takes them in and around the circumference of the park, whose 75 acres feature a six-field baseball complex, an 18-hole disc golf course and a five-acre concert amphitheater area.

Runners follow the park’s half-mile walking trail all the way around, exiting onto South Park Road and then meeting up with Texas Boulevard. After a couple more turns, the course then takes runners onto Olive Street, which they follow for a long straightaway (plus a couple of last-mile turns) toward the finish line on West Broad. 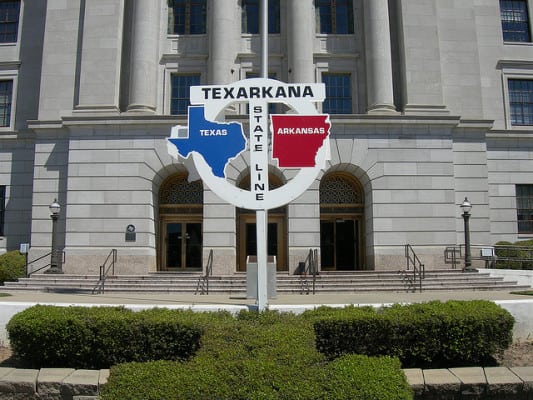 Located right on the border with Arkansas in easternmost East Texas, the town of Texarkana tends to see mild to moderately cool and sometimes even cold conditions in the late winter months, as February temperatures average between 34°F and 58°F.

On the day of the race (Feb. 19), the average low is 34°F and the average high is 59°F. Rainfall during the month averages 3.8 inches, making February the city’s third-driest month of the year.

See the race route map for the Run The Line Half Marathon here.

To reserve your spot in the late winter 2023 running of Texarkana’s Run The Line Half Marathon race, register online at RunSignUp.com here.