Filled with scenic farmland, vineyards and rural country roads, the course for the Spicewood Vineyards Half Marathon & 10K offers some challenging hills as well as some beautifully pastoral views of this corner of the region known as the Texas Hill Country, which lies just a short drive from nearby Austin.

The race follows an out-and-back route that starts and finishes at the Spicewood Vineyards (hence the name of the event), a locally owned award-winning winery founded back in 1992 whose specialties include their Chardonnay and Sauvingnon Blanc wines, both of which have won numerous awards in Texas wine competitions. From there — the winery lies just off Highway 71, on County Road 409 — runners head out onto the scenic farm roads of Burnet County.

Because much of the race takes runners over rural dirt farm roads, whose surfaces can be alternately rocky, sandy or even slippery in spots, the race organizers have volunteers out on the course to ensure that any tricky spots are covered.

The course features what the organizers describe as “two monster hills” around the middle portion of the race, but there’s a big reward for climbing these hills, they add, as these sections of the course feature some of the route’s best panoramic views of the nearby farmland and hills all around.

Once runners reach the half-way turnaround point, they then head back along the route they’ve just run all the way back to Spicewood Vineyards for the finish. Following the race — which runners in both events have a time limit of four hours to complete — there will be post-race festivities at the winery, including wine tastings and food.

Here’s what runner Steve Wakefield of Austin, Texas, had to say after he ran the race a few years ago:

“Although this was the most difficult half marathon I have run, it was intimate and genuine fun. The course was astonishingly difficult. Look at the finishing times and recognize that these were mostly very experienced runners. You can’t train correctly for this, but if you prepare, mentally, for the grades, you will have a great time. Never think you will get a PR or even close. Expect to walk on some of the uphills.

I’ve not done a race like this where the other runners were so willing to chat and encourage each other. The finish was convivial and fun and different (grapes and barbeque and wine and beer). This is not a first-timer’s race but one that’s off the beaten path, well organized, and just plain fun. Once I realized I had to tap the brakes a bit, this was one of the best races I’ve participated in. If the description sounds good to you, don’t hesitate! I loved this one!” 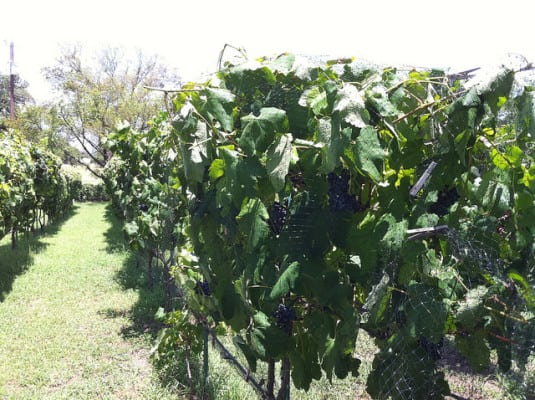 Located in the area known as the hill country in southern Texas, about 40 miles northwest of Austin and roughly 90 miles north of San Antonio, the small town of Spicewood typically sees its coolest weather of the year in December and January, as December’s average monthly temperatures range between 39°F and 62°F.

On the day of the race (Dec. 9), the average low is 41°F and its average high is 62°F, while precipitation totals for the month average just under 2.7 inches.

See the race route map for the Spicewood Vineyards Half Marathon.

To reserve your spot in the 2023 running of the Spicewood Vineyards Half Marathon or 10K race, register online at RedPodium.com here.

Ever run in the Spicewood Vineyards Half Marathon? Share your impressions here, or post your review in the Comments below.