McKinney’s Stonebridge Ranch Half Marathon takes runners through this master planned community just north of Dallas, whose roughly 5,000 acres also feature parks, golf courses, lakes for fishing and swimming, as well as plenty of hills on the roads through the development.


It’s the hills that many of the runners who’ve taken part in the past two years have noted, along an out-and-back route that starts and finishes at the Stonebridge Ranch Beach and Tennis Club, just off the Virginia Parkway.

From there, runners head out on what is roughly a counter-clockwise loop through the community, and hit the first of the route’s many rolling hills in the first couple of miles.

Runners make their way along paved residential streets for nearly all of the event’s 13.1 miles, weaving in and out of neighborhoods that are nestled among the fairways, tees and greens of the community’s golf course.

Once they make their way around the neighborhood streets, runners then head back onto Stonebridge Drive and head north toward the beach and tennis club, which overlooks the reservoir lake in the middle of the community.

The race finishes back where the runners start at the beach and tennis club, and entrants should note that they’ll have 3 1/2 hours to complete the race following the 7:30 AM starting time — the race course closes at 11:00 AM.

While you’re in town for the race, there’s attractions like the Heard Museum, where you can check out Dinosaurs Live!, a tour of giant, life-size animatronic dinosaurs on the grounds surrounding the museum. 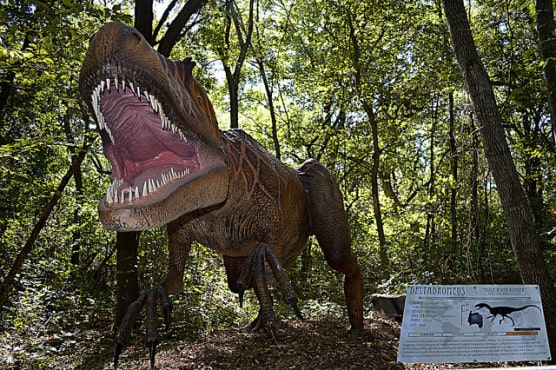 A life-like Tyrannosaurus Rex at Dinosaurs Live!, at the Heard Museum in McKinney, Texas. (Photo by Russ/flickr)

Located along the northern edge of the Dallas-Fort Worth metroplex, roughly 30 miles north of downtown Dallas, McKinney typically experiences February, temperatures between 58°F and 35°F, while precipitation amounts average just over 2.9 inches for the month.

See the race route map for the Stonebridge Ranch Half Marathon here.

To reserve your spot in the late winter 2015 running of McKinney’s Stonebridge Ranch Half Marathon, register online at Active.com here.

Ever run in the Stonebridge Ranch Half Marathon? Share your impressions here, or post your review in the Comments below.