Run alongside the Trinity River as the sun is setting over the Dallas skyline at this early fall race, at a time of year when this famously hot city should see much milder temperatures and you can enjoy a beer right after you cross the finish line near Trinity Groves, a mecca of restaurants and bars right next to the Margaret Hunt Hill Bridge.

Get your glow gear on. You’ll start the half marathon at 4:00 in the afternoon — followed by the 10K and 5K races at 5:30 and 5:45, respectively — in the shadow of the Margaret Hunt Hill Bridge and the Ronald Kirk Pedestrian Bridge.

From there, the course will take you along parts of the Trinity Skyline Trail, a 4.6-mile-long trail for running, walking and cycling that winds up and down the Trinity River, which stretches some 710 miles from the northern corner of the state all the way down to Galveston Bay.

Run under — and over — a few bridges. From the starting line where you cross under the Margaret Hunt Hill Bridge, named for the legendary Dallas philanthropist and daughter of H.L. Hunt, one of Texas’s most famous oil tycoons, you’ll run over bridges at Corinth Street early in the race and Sylvan Avenue late in the second half.

Flat and fast. Thanks to its location along the Trinity River, virtually the entire course is as flat as the Texas plains — the race starts at just over 400 feet above sea level, and never rises higher than about 430 feet.

You’ll receive a race medal and technical t-shirt along with a “finisher’s beer” when you cross the finish line in front of the Trinity Groves, near the Continental Bridge at Gateway Plaza West. And if you want an extra challenge, you can run any combination of the three races — including all three races — and receive an additional medal and bragging rights. 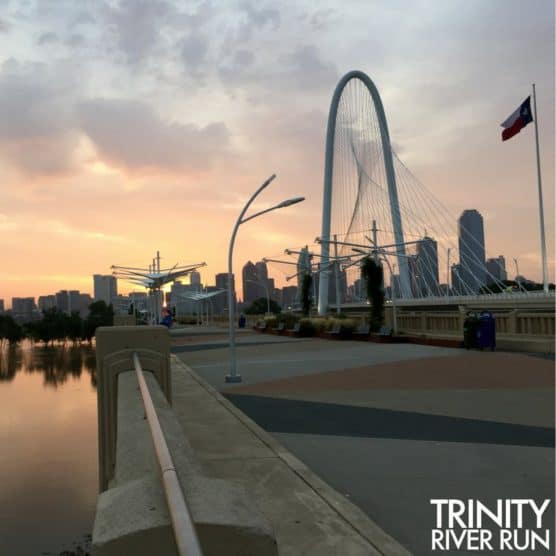 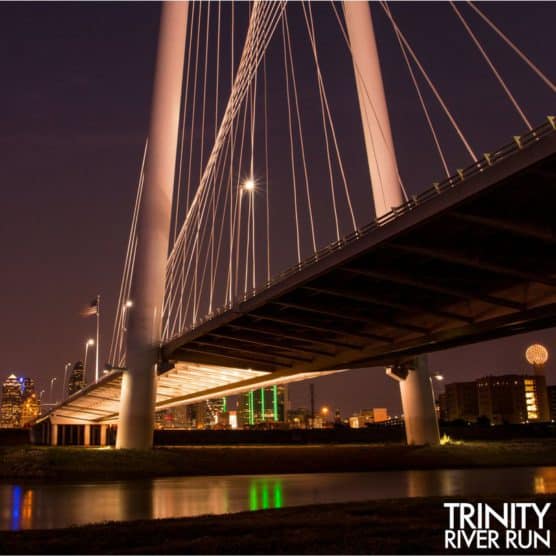 Located within the Dallas-Fort Worth metropolitan area in central northern Texas, Dallas typically sees some of its mildest and driest weather of the year in November, when temperatures average between the high 40s and the mid-60s.

See the race route map for the Trinity River Run Half Marathon here.

To reserve your spot in the 2021 running of Dallas’s Trinity River Run Half Marathon, 10K or 5K race, visit the event website below.

Ever run in the Trinity River Run Half Marathon? Share your impressions here, as well as anything you learned about the race that you think other runners/walkers should know.