Set for its 15th annual running, Sugar Land’s Memorial Hermann USA Fit Marathon, Half Marathon & 5K typically sees more than 1,000 runners and walkers cross the finish line in all three races combined, including several hundred runners each year in the half marathon alone.

The race is the signature running event for USA Fit, a nationwide fitness and running training organization that offers coaching and group training in 19 states and the District of Columbia (as well as Canada), and takes runners on an out-and-back route that starts and finishes on the Sugar Land campus of the University of Houston, whose main campus is located closer to downtown Houston, just a short drive from Sugar Land.

Known perhaps most famously to those outside Texas as the home district for embattled former U.S. Congressman Tom DeLay, the city of Sugar Land has been a booming suburb of the Houston area over the past decade, and was named one of the nation’s best cities to live in by CNN/Money and Money Magazine back in 2006.

The city also has a number of planned communities, and got its start as a company town thanks to companies like Imperial Sugar, whose logo is part of the city’s logo.

Open to runners and walkers, the race features a very generous time limit — 8 hours for the full marathon, 6 hours for the half marathon — and takes participants on a course that’s largely fast and flat, with a few gently rolling hills.

Start at the University of Houston. From the start on campus, runners head out and turn right on University Boulevard and head south, all the way down to the turnaround point on Commonwealth Boulevard.

After the turn, runners then head back along Commonwealth and then turn right and head north along University, which they stay on for the next two and a half miles, all the way to the second turnaround point of the half marathon, as University intersects with Highway 6.

From there, runners then turn around and head south to New Territory Boulevard, where they turn right and head west into the New Territory neighborhood, known for its shaded, tree-lined streets.

Back to campus for the finish. Following the roughly mile-long stretch along New Territory, runners then turn right and head for a long, 4-mile counter-clockwise loop around Homeward Way, which brings runners through residential neighborhoods and then back onto New Territory Boulevard.

The final two miles of the race then bring runners back onto University Boulevard, and then back down to the campus for the race finish. 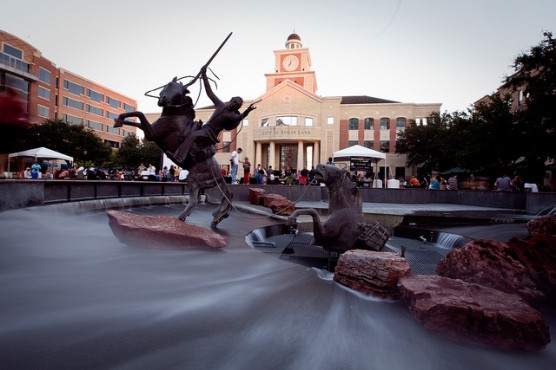 Located in the southeastern part of the state, just over 20 miles southwest of Houston and roughly a 65-mile drive northwest from the Texas coastline of the Gulf of Mexico, Sugar Land typically experiences its coldest weather of the year in January, with (very) occasional trace amounts of snow.

On the day of the race (Jan. 29), the average low is 47°F and the average high is 61°F — while rainfall totals average just under 3 inches for the month.

See the race route map for the USA Fit Half Marathon here.

To reserve your spot in the 2023 running of Sugar Land’s USA Fit Marathon, Half Marathon or 5K race, register online at the event website here.

Ever run in the USA Fit Half Marathon? Share your impressions here, or post your review in the Comments box below.