The first in a three-race series of half marathons known as the Race Texas 13.1 Series, the West Texas Half is set for its 3rd annual running along what organizers say is a “relatively fast and flat” course in this prairie land city of roughly 110,000 people, much of which unfolds on trails alongside the Concho River.


The race starting line lies on San Angelo’s South Oakes Street at historic Fort Concho, a U.S. Army post whose history dates back to just after the end of the Civil War, and has served as a home for everything from mounted cavalry and infantry to the famous Black Cavalry, who also have become perhaps more well-known as the “Buffalo Soldiers,” the name they were given by the Native Americans living in this largely flat, treeless prairie region at the time.

From there, runners will head through a few city as blocks as they make their way toward the confluence of the three rivers that meet in San Angelo — the city has been called “the Oasis of West Texas” thanks to all this water running through it — out onto Rio Concho Drive.

Once they make it onto Rio Concho Drive and head across the bridge to the opposite side of the river, runners will make their way to Bell Street, where they’ll turn right and cross over the river again. That’s followed by a stretch through South Concho Park, and then a loop around the neighborhoods along Tres Rios Drive.

The changes in elevation here along the paved streets and trails is mostly gently rolling hills — there’s little more than 20 or 30 feet of elevation change throughout the course — and most of it keeps runners right on the banks of the North and South Concho Rivers.

Runners cross over a bridge again at East Avenue K, and then turn right to head through a few city blocks after passing through the Lone Wolf Reservoir. They’ll head north until they reconnect with Rio Concho Drive and begin a long, winding riverside stretch for the remainder of the race, all the way to the loop turnaround in North Concho Park.

Once they make the turn, runners then retrace their steps all the way back along the river to the finish line at the San Angelo River Stage, on the banks of the Concho River along East Avenue A. 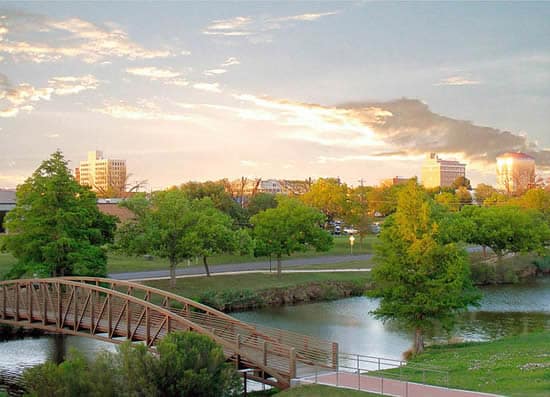 Known for its dry, warm climate throughout most of the year, San Angelo — located in West Texas, about 225 miles southwest of Fort Worth and roughly 210 miles northwest of San Antonio — typically sees October temperatures that average between 52°F and 79°F, while rainfall totals average just over 2.7 inches, making October the city’s fourth-wettest month of the year.

See the race route map for the West Texas Half Marathon here.

To reserve your spot in the 2016 running of San Angelo’s West Texas Half Marathon or 5K race, register online at Active.com here.

Ever run in the West Texas Half? Share your impressions here, or post your review in the Comments below.