Runners get the chance to run in the shadow of the majestic red rock formations of Utah’s Arches National Park at the Canyonlands Half Marathon & 5-Mile Run, which will celebrate its 46th annual running as winter is giving way to spring.

Now one of the Moab area’s most popular outdoor athletic events, the race has seen its field of runners grow from just 22 (including a dog) at its first running to more than 2,700 finishers in the half marathon and 5-mile races combined in 2015, thanks in large part to the stunning red rock scenery that lines the course.

Set at a moderate elevation of about 4,000 ft., the half is run on a USATF-certified and sanctioned course that offers a challenging mix of rolling hills and fast descents.

Beginning approximately 11 miles up Highway 128 outside of Moab, the first mile of the race goes east of the start line before following the paved highway road as it winds through the beautiful red rock canyons carved by the Colorado River.

Two miles from the finish, the road exits the red-walled canyon and continues on Highway 191 and through the streets of Moab to the finish line in Lions Park, where refreshments, live music, and post-race massages await the finishers. Participation is limited to the first 5,000 entries for the half marathon and accompanying 5-miler.

While a lottery has been used in the past to allot spaces in the half marathon, organizers note, there will be no lottery for this year’s race — all spots will be awarded on a first-come, first-served basis, so runners thinking of signing up for this race are strongly encouraged to register as early as possible. 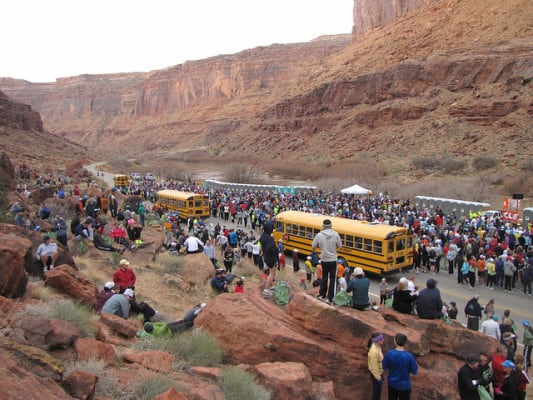 Runners gather at the starting line of the 2011 Canyonlands Half Marathon near Moab, Utah. (Photo by Karah Levely-Rinaldi/flickr)

See the race route map for the Canyonlands Half Marathon here.

To reserve your spot in the spring 2023 running of Moab’s Canyonlands Half Marathon or 5-Mile race, register online at UltraSignup.com here.

Ever run in the Canyonlands Half Marathon? Share your impressions here, or post your review in the Comments below.