The southern Utah region known as “Color Country” is the setting for the annual late winter running of Washington’s Washington City Half Marathon & 5K (formerly Dogtown Half Marathon until 2019), which unfolds along paved roads and dirt trails through an area known for both its brilliant blue skies and the red rock formations made famous in photos of its national parks, as well as its mild winter climate.

Designed as a fundraiser for Washington’s Homeless Animal Rescue Team as well as its public safety department, the race’s proceeds will be used to provide shelter to homeless dogs, cats and other animals in the local area, and will be used to help the local police department purchase a dog for use in police work.

The course for the 13.1-mile half marathon race follows a loop course that starts and finishes at the Staheli Family Farm in the area of the city known as Washington Fields. (Runners before 2021 will recognize this location as the finish line of the previous point-to-point course.)

Runners begin the half marathon by winding their way north through Washington Fields for the first four miles of the race, which is mostly downhill with the exception of a few gentle rolling hills.

Those slight changes in elevation will serve you well as a warmup for the second half of the race, as you’ll be greeted by a small uphill climb after turning on to Washington Dam Road, along with a couple of more small hills before returning to the finish line at the Staheli Family Farm — with an elevation gain of 364 feet. 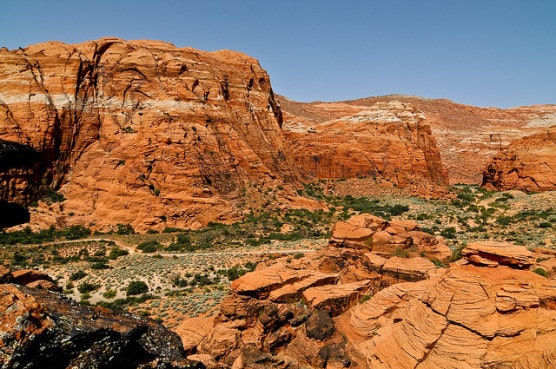 Located in the southwestern corner of the state, just a short drive from nearby Zion and Bryce Canyon National Parks and roughly 300 miles south of Salt Lake City, Washington typically experiences mild to moderately cool and occasionally quite cold temperatures in the late winter season, and mostly dry weather throughout the year.

See the race route map for the Dogtown Half Marathon here.

To reserve your spot in the 2023 running of Washington City’s Dog Town Half Marathon, Double Dog Dare, 5K or Kids Run, register online at RaceEntry.com here.

Ever run in the Washington City Half Marathon? Share your impressions here, or post your review in the Comments box below.