Glow sticks, flashing glow-in-the-dark balloons, LED glowing wands and more will be just a few of the items that light up the trails between Farmington and North Salt Lake communities just north of Salt Lake City at the Legacy Midnight Run Half Marathon, 10K & 5K, a rare night-time half marathon race event that makes its 9th annual running this summer.

The brainchild of On Hill Events, a locally-based race management company that manages a dozen running, triathlon, swimming and relay events across Utah each year, the Legacy Midnight Run will take runners on a point-to-point 13.1-mile route that unfolds entirely along Salt Lake City’s Legacy Parkway Trail, a paved running, walking and jogging trail that’s so flat one observer in Salt Lake Magazine described it this way: “Grandma could do it.”

Not that you’ll be able to take in much of the scenery, of course — thanks to its night-time start, the course will of course be dark, which makes the glow-in-the-dark gear the race organizers plan to hand out make perfect sense, both to prevent runners bumping into each other along the course and to help volunteers and organizers find anyone who wanders off the race route by accident and can’t find their way back.

The awards ceremony for the race begins just after midnight back at the finish line in Farmington, which means that organizers expect runners to take no longer than three hours to finish the 13.1 miles of the half marathon — they plan to sweep the course starting at 1:00 AM, to pick up any stragglers who are unable to finish within the race time limit. 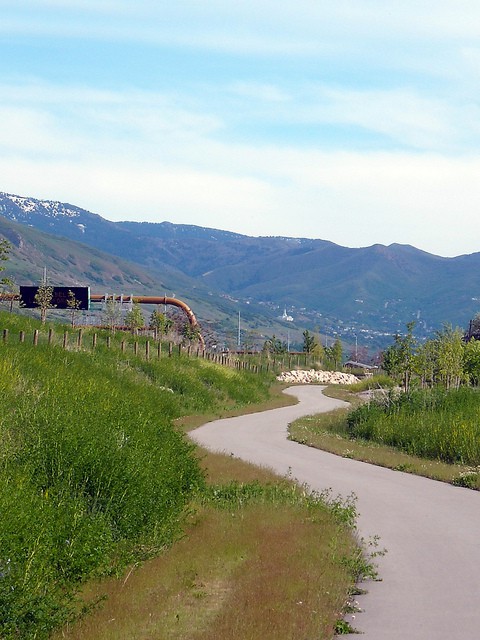 The Legacy Parkway Trail near Farmington, Utah, during the day. (Photo by Garrett/flickr)

Located just a few miles north of downtown Salt Lake City in central northern Utah, Farmington typically sees  its warmest and driest weather of the year — during the day, of course — in July, when rainfall totals average just under an inch for the month.

See the race route map for the Legacy Midnight Run Half Marathon here.

To reserve your spot in the 2019 running of North Salt Lake’s Legacy Midnight Run Half Marathon, 10K or 5K race, register online at RaceEntry.com here.

Ever run in the Legacy Midnight Run? Share your impressions here, or post your review in the Comments below.