Perhaps best known for the dramatic natural landscapes of nearby Snow Canyon State Park — whose tall, red rock bluffs tower over the desert-like landscape that surrounds this small city just a short drive from St. George — this small city plays host to the 3rd annual running of the Run Like a Girl Half Marathon & 5K in 2015.


The race, a women’s-only event, is part of a weekend retreat for women called the Run Like a Girl Retreat, which takes place twice a year and welcomes women of all ages for programs aimed at empowerment and fitness, with athletic coaches and speakers in addition to a half marathon, 10K and 5K race, depending on which retreat one attends.

The remote nature of the site is as much a part of the attraction as the race itself, as the course is set to take runners through some of this area’s most serene and beautiful landscapes. Runners will start the half marathon on Sunday morning of the retreat weekend at 9:00 AM, near the trailhead that lies just off 4200 North, near the southern end of Snow Canyon State Park.

Thanks to its location in the state’s southeastern corner, it usually enjoys mild weather this time of year, and its red and white sandstone cliffs (with occasional black lava rock) help make it a popular spot for hikers.

From the starting line on 4200 North, runners will then follow the highway as it heads south into the canyon, heading downhill for the first three miles. Between the start and about half-way between the mile 3 and mile 4 markers, the course elevation drops some 700 feet. It flattens out again once runners make the turn off 4200 and onto Snow Canyon Parkway, where they turn right and head west toward Ivins, and begin a very gradual incline that continues over the next several miles.

Mountains, bluffs and red rocks will be visible on the horizon all around as runners head into the center of Ivins, a small city of just over 7,000 residents that’s often considered a place to relax after visiting nearby St. George, a tourist destination that often sees bigger crowds during the high season. 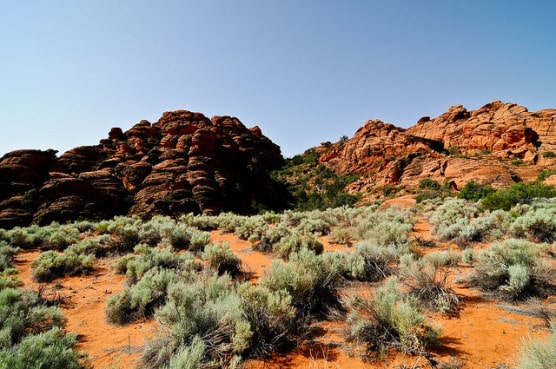 Located just south of Snow Canyon State Park in Utah’s southwestern corner, about eight miles northwest of St. George and roughly 130 miles northeast of Las Vegas, Nev., Ivins typically sees cold to mild weather in February, a month that has brought record temperatures here as low as 5 degrees (in 1933) and as high as 84 degrees (in 1986).

See the race route map for the Run Like a Girl Half Marathon here.

To reserve your spot in the late winter 2015 running of Ivins’s Run Like a Girl Retreat Half Marathon or 5K race, register online at Active.com here.