Set for its annual late-summer running here in this corner of southernmost Vermont near the Massachusetts state line, known for the scenic pastoral beauty of its lakes and forests, this race welcomes both runners and walkers for an often hilly run on an old railroad bed, with views of the Harriman Reservoir throughout.


The race begins overlooking the lake on the Harriman Dam, which looks out onto the water from 215 feet above and stretches some 1,250 feet across. From there, you’ll run the first 600 feet or so of the race on paved surfaces, and after that you’ll head onto the trails along the reservoir.

Runners can expect more than 700 feet of elevation gain during the race, with the steepest hills coming between miles 3 and 5 (and then again between miles 8 and 10 on the return route back).

Throughout the race, you’ll run through largely undeveloped forest lands and along the old Hoot, Toot & Whistle railroad bed, many of whose wide, flat trails still feature trellises that’ll remind you of a bygone era when rail travel was the norm.

The reservoir you’ll run alongside dams up the Deerfield River and takes its name from the town of Harriman, which today lies at the bottom of the lake. It had become deserted over the years and was flooded when the river was dammed decades ago.

Among other historical notes, Brigham Young (the famed Mormon and founder of Salt Lake City) was born in this area back in 1801, and its town center is listed in the National Register of Historic Places.

Once you make it all the way to the half-way turnaround point, just across the river from Castle Hill, then you’ll repeat the route you’ve just run in reverse, all the way back to Harriman Dam for the finish.

You’ll have 4 hours to complete the half marathon, and organizers say you’re free to run or walk as many miles as you like — but you must be off the course by 1:00 PM. 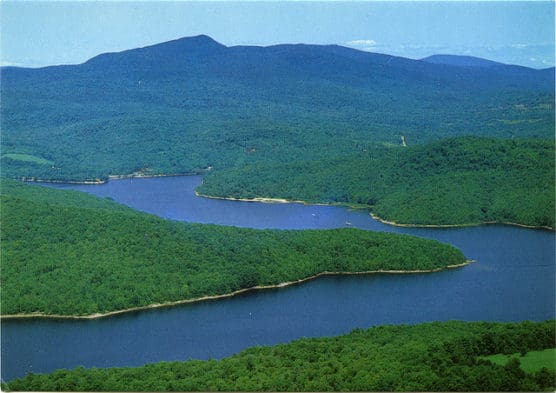 Nestled among the Green Mountain and Finger Lakes region of southern Vermont, roughly 130 miles south of Montpelier, Whitingham typically sees some of its warmest weather of the year in August, with temperatures ranging from the low 50s to the low 70s, while precipitation is pretty even year-round.

To reserve your spot in the 2018 running of Whitingham’s Best Dam Run & Walk Half Marathon, register online at EventBrite.com here.

Ever run in the Best Dam Run & Walk Half Marathon? Share your impressions here, as well as anything you learned about the race that you think other runners/walkers should know.