Organized and staged by the Central Vermont Runners club, the Leaf Peepers Half Marathon has been a fixture in this northern Vermont town for a quarter century. It’s also timed to coincide with one of the most popular tourist seasons in the Northeast, the fall foliage viewing season.

From the starting line at Waterbury’s state complex downtown, this out-and-back race unfolds along terrain that’s mostly fast and flat, and is mostly run along paved surfaces.

Runners will head out from there – the starting line lies just off Main Street – and north along River Road, and continues north to the turnaround point in North Duxbury before heading back south.

The 13.1-mile course for the race takes the hundreds of runners who participate in the race each year through some of Vermont’s most scenic country backroad areas, through the towns of Duxbury and Waterbury, which is perhaps best known as the home of Ben & Jerry’s Ice Cream, whose factory is Vermont’s most popular tourist attraction. 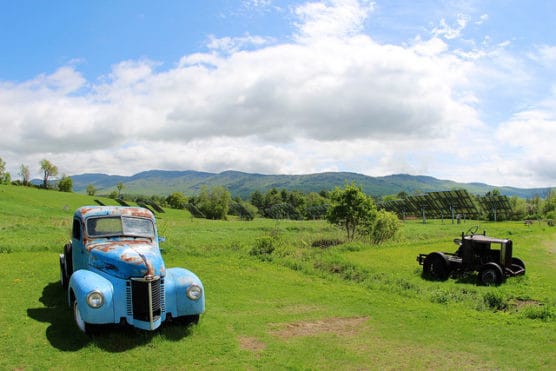 What you’ll see in Waterbury, Vermont. (Photo by daveynin/flickr)

Located just off I-89 in northern Vermont, about 25 miles southeast of Burlington, Waterbury typically sees relatively even rainfall year-round and cool to mild weather in September, which has brought record temperatures here as low as 10°F (in 1925) and as high as 90°F (in 1997).

See the race route map for the Leaf Peepers Half Marathon.

To reserve your spot in the 2023 running of Waterbury’s Leaf Peepers Half Marathon or 5K race, register online at the race website here.

Ever run in the Leaf Peepers Half Marathon? Share your impressions here, or post your review in the Comments below.