Set for its third annual running in early May 2017, the Adam and Eve Half Marathon and 8K sees an average of 75 participants finish each year. Runners will start the out-and-back course for the race in McIntire Park, the home of the city’s annual spring Dogwood Festival where you can explore roughly 150 acres of meadows, forests, winding streams and rolling hills, which offer gorgeous views of the mountains that lie to the east of the city.


From the starting line, near the Lewis & Clark Exploratory Center in Darden Towe Park, runners will head down Free Bridge Lane with the river on their right before crossing over on Long St. Following the Rivanna Trail south, runners will race along the river with a turn around point in Riverview Park.

Heading back along the same trail, participants run back north along the river before taking a left off the trail and a right on River Rd at the 5 mile mark. A quick right on St. Clair Ave followed by a left onto Locust Lane before heading back south on Locust Ave for the next mile. Runners will now repeat this process in reverse, following the river south and then north, crossing over the bridge once again at approximately 11.5 miles before heading into Darden Towe Park towards the start/finish line.

Perhaps one of the race’s most interesting features is that it’s a “traffic light” event, which means that runners are encouraged to dress in colors that signal their relationship status. A green shirt means “go,” as in “single and ready to mingle,” while a red shirt means “stop” (you’re in a relationship). A yellow shirt says “it’s complicated.” 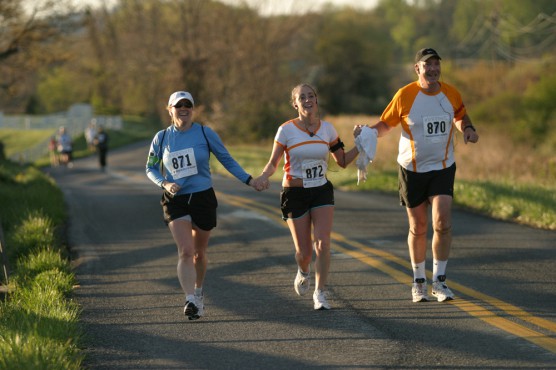 Runners along the course that will be used at the Adam and Eve Half Marathon in Charlottesville, Va. (Courtesy Bad to the Bone Endurance Sports)

Nestled along the Rivanna River in central northern Virginia, about 70 miles northwest of Richmond and roughly 115 miles southwest of Washington, D.C., Charlottesville typically sees May temperatures between 54ºF and 72ºF, while records for the month have reached as low as 30ºF (in 2002) and as high as 97ºF (in 2000).

See the race route map for the Adam and Eve Half Marathon here.

To reserve your spot in the late winter 2017 running of Charlottesville’s Adam and Eve Half Marathon or 8K race, register online at Active.com here.

Ever run in the Adam and Eve Half Marathon? Share your impressions here, or post your review in the Comments box below.