Nearly 30,000 runners come out to run the streets of Virginia Beach every year around St. Patrick’s Day at the annual Yuengling Shamrock Marathon, Anthem Half Marathon and TowneBank 8K race, which follows a point-to-point route that starts on Pacific Avenue and finishes on the oceanfront, in front of Neptune’s Park along the beach.

The course for the half marathon features an elevation that changes by only about 20 feet over the course of the race. Though there are some rolling hills here and there, overall the course is fast and flat thanks largely to its location near the oceanfront here at Virginia Beach.

From the starting line at Pacific Avenue and 42nd Street near Cavalier Park, runners head north along Atlantic Avenue for the first few miles, until they make their way into Fort Story, now known as the Navy’s the Joint Expeditionary Base East.

They’ll make their way for a pair of loops along Atlantic Avenue and Shore Drive through Fort Story, located on Cape Henry near the entrance to Chesapeake Bay.

After that, the course brings runners back onto Atlantic Avenue, where they head south in the opposite direction from earlier. The final couple of miles bring them past the starting line area and onto Atlantic to 37th Street, where they turn left and head toward the beach, turning onto the Virginia Beach Boardwalk for the home stretch in to the race finish line at Neptune’s Park.

As one HalfMarathons.Net reader commented on her experience of the race a few years back: “I would totally run/walk the half-marathon again. I did it last year and it was amazing. Along with that our hotel was on the ocean with an ocean view which was so cool. The course is nice in that it takes you through camp story and its amazing to see everything along the route.”

The Shamrock Half Marathon is limited to the first 10,000 entrants — 6,800 runners crossed the finish line in the 2016 half — and the course time limit is 4 hours, which means you’ll need to keep a pace of 18 minutes, 19 seconds per mile or faster. 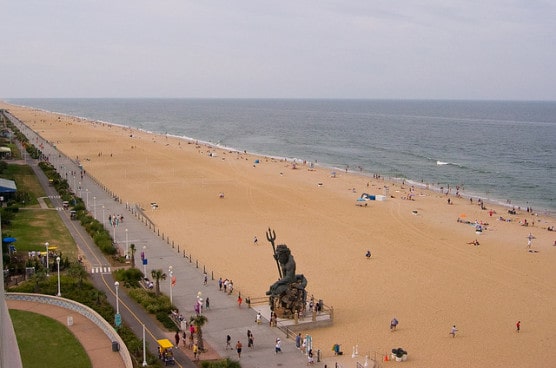 The early weeks of spring can still be quite cool in the Virginia Beach area, especially in March, when temperatures average between 40°F and 59°F. Come prepared for rain, as the month sees an average of nearly 4 inches of precipitation.

See the race route map for the Shamrock Half Marathon here.

To reserve your spot in the late winter/early spring running 2023 of Virginia’s Yuengling Shamrock Marathon, Half Marathon or 8K race, register online at HakuApp.com here.

Ever run in the Shamrock Half Marathon? Share your impressions here, or post your review in the Comments box below.