More than 900 runners cross the finish line each year at the Williamsburg’s Sentara Colonial Half Marathon & 5K, including more than 700 in the half marathon alone, for a race that takes runners along the streets and neighborhoods of this historic Virginia city nestled in the Chesapeake Bay area and celebrates its 44th annual running in the late winter of 2023.

The race begins with a processional to the start by the Williamsburg Fife and Drum Company, and from there the race takes runners on a combination of hills and flat stretches over Williamsburg’s city streets and through its historic neighborhoods, the race begins downtown on the beautiful campus of the College of William and Mary and takes runners along a scenic, hilly route through the city’s residential areas.

After that, the race takes participants out to Carter’s Grove Country Road and to the edge of the Busch Gardens Williamsburg theme park, before returning back to the College for the finish.

Runners are limited to 3.5 hours for the half marathon and 1 hour for the 5K, and runners will finish the race in William and Mary Hall, where spectators can watch from the arena stands. 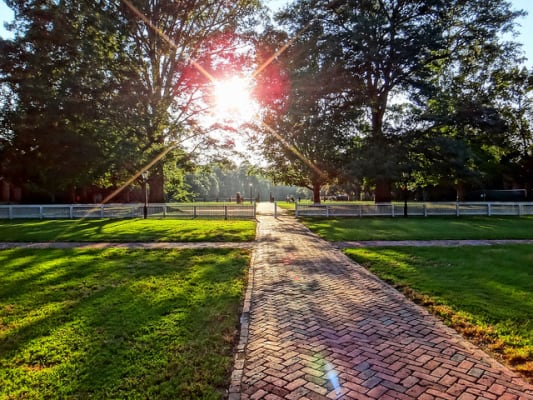 The campus of the College of William and Mary in Williamsburg, Va. (Photo by Oleg/flickr)

Located in the state’s southeastern corner, just over 50 miles southeast of Richmond and roughly 150 miles south of Washington, D.C., Williamsburg typically sees February temperatures that average between 32°F and 51°F, while precipitation amounts average just over 3.3 inches, making February its second-driest month of the year.

See the race route map for the Colonial Half Marathon here.

To reserve your spot in the late winter 2023 running of Williamsburg’s Colonial Half Marathon or 5K race, register online at RunSignUp.com here.