Get ready for a race filled with pink running outfits, sequined tiaras and feather boas when you run one of the Divas Half Marathons, a series of races designed for women that take place from California to Canada to Puerto Rico each year, and arrive in the Washington, D.C., area in mid-September.


The race follows a scenic, winding out-and-back course that starts and finishes at Virginia’s Tarara Winery, which lies on more than 470 acres along the foothills of the Catoctin Mountains on the Potomac River just north of Leesburg, where founder Whitie Hubert first began growing grapes back in the mid-1980s.

Today the winery is considered one of the area’s top-rated wineries and is best known for its Chardonnay, Cabernet Sauvignon, Merlot and Cabernet Franc wines.

From the starting line on Tarara Lane, runners will head out to Lost Corner Road, where they’ll turn right and head northwest into the nearby neighborhoods, passing through quiet streets and past plentiful farm fields and country churches, along rural highways that look out onto wide-open stretches of farmland.

There are a few rolling hills here and there along the course, but not a great degree of elevation change — the lowest point on the course (just after mile 5) drops to just under 240 feet above sea level, while the highest point (just after mile 12) reaches just above 370 feet.

“Diva stations” will be scattered throughout the course, organizers note, with boa and tiara sections and a “bubbly toast” at the finish line. There’s also a 5K race, but it takes place Friday late afternoon/early evening — while the half marathon runs on Saturday morning. 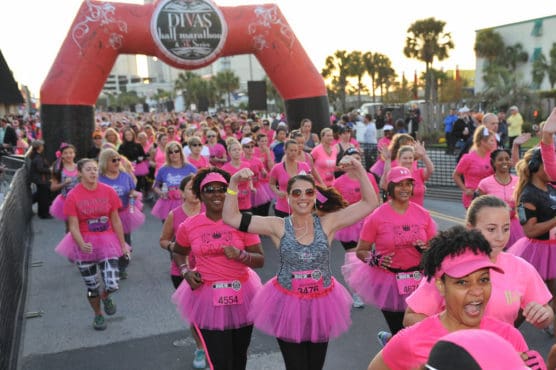 Nestled along the Potomac River on the border between Virginia and Maryland, roughly 33 miles northwest of Washington, D.C., Leesburg typically sees still-warm weather this time of year, as September brings temperatures that average between the mid-50s and the upper 70s.

See the race route map for the Divas Half Marathon in DC’s Wine Country here.

To reserve your spot in the 2018 running of Leesburg’s Divas Half Marathon in DC’s Wine Country or the 5K race, register online at Active.com here.

Ever run in the Divas Half Marathon in DC’s Wine Country? Share your impressions here, as well as anything you learned about the race that you think other runners/walkers should know.