Known for its beautiful rolling green hills and horse farms, this central Virginia city of just over 8,000 souls plays host to the High Bridge Half & 5K, which unfolds entirely on the 31-mile-long High Bridge Trail, and takes runners across the famed bridge from which the trail takes its name.

Runners will start the race in downtown Farmville at the plaza of High Bridge Trail State Park, a roughly 1,100-acre park just over an hour’s drive west from Richmond that is home to the 2,400-ft.-long High Bridge, which looks down onto the Appomattox River flowing below from about 125 feet above.

The race will take runners over the bridge and along the wide, flat crushed limestone trail for an out-and-back course with gorgeous natural beauty.

From the starting line near Green Front Furniture downtown, near the intersection of North Main Street and Depot Street, the race starts runners off by heading northeast along the trail.

They’ll wind northeast, east and southeast with the trail for the first few miles, and by the time they reach the stretch between mile markers 4 and 5, that’s when they hit the High Bridge itself, about 4 1/2 miles from the starting line.

Famous for being the longest recreational bridge of its kind anywhere in Virginia — this former railroad bed, which dates back to the mid-1800s, is open to bikers, walkers, runners and hikers only, not motorized vehicles — and among the longest in the country, the High Bridge offers beautiful views of the river below as runners pass over it, as well as views that go on for miles of the forests and rural countryside that surround Farmville. 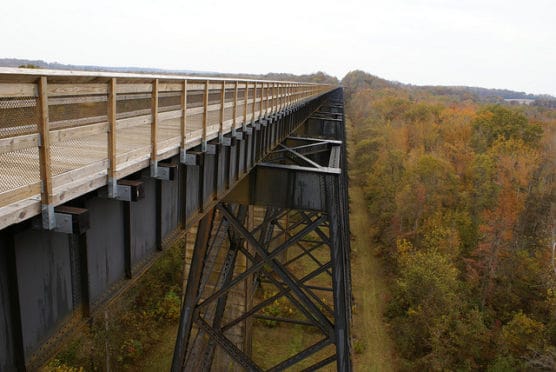 Nestled along the winding Appomattox River in central Virginia, about 65 miles west of Richmond, Farmville typically sees cool to mild weather in October, which has brought record temperatures as low as 12°F (in 1962) and as high as 100°F (in 1941).

See the race route map for the High Bridge Half Marathon here.

To reserve your spot in the 2022 running of Farmville’s High Bridge Half Marathon or 5K race, register online at RunSignUp.com here.

Ever run in the High Bridge Half? Share your impressions here, or post your review in the Comments below.