Set for its 6th annual running this fall, the LewisGale Salem Half Marathon is set to take runners on an out-and-back course through this city of just over 24,000 people in Virginia’s Shenandoah Valley, where the winding Roanoke River passes through and the woods of the George Washington and Jefferson National Forest lie just to the north.

Runners are set to start the race, which is being organized by the city of Salem’s parks and recreation department, near the intersection of Main Street and Broad Street downtown. From there, the course heads first into the campus of Roanoke College, a liberal arts college where more than 2,000 students study each year.

After that, the race winds through neighborhoods and city blocks, past the Salem Golf Course and along the banks of the Roanoke River for a stretch in the second half of the course.

Its hilliest stretches are found in the early going, in the first few miles of the race – probably the race’s biggest hill occurs just past the mile 3 marker, just as runners are making their way along Red Lane and Mount Vernon Lane. After that, the hills drop off for the next several miles and the race flattens out.

Founded all the way back in 1802, Salem today is home to the Division III championships for college football, basketball, women’s softball and volleyball – earning it the nickname “Virginia’s Championship City” – and is home to minor league baseball’s Salem Red Sox.

Once you’re done with the race, you can take in the natural beauty of the Shenandoah Valley that surrounds Salem, including a day trip to Shenandoah National Park, which lies about a two-hour drive north of the city. 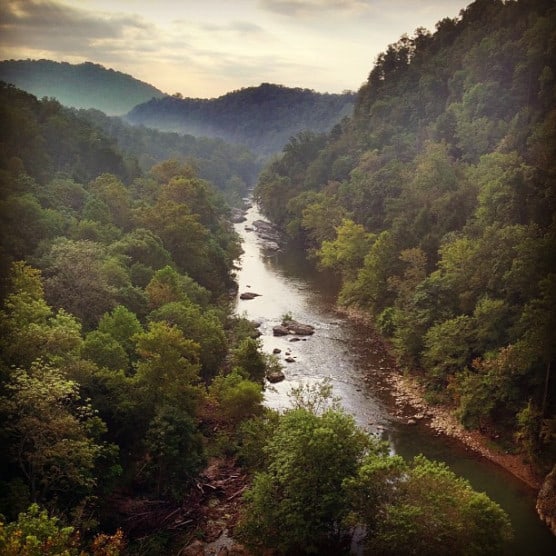 A view of the Roanoke River, taken from a stretch along the Blue Ridge Parkway. (Timothy J/flickr)

Nestled along the Roanoke River in southwestern Virginia, just a few miles to the northwest of Roanoke, Salem typically sees some of its mildest weather of the year in October, which has brought record temperatures here as low as 22ºF (in 1976) and as high as 99ºF (in 1941).

See the race route map for the LewisGale Salem Half Marathon here.

To reserve your spot in the 2022 running of Salem’s LewisGale Salem Half Marathon, 8K or Kids Race, register online at RunSignUp.com here.

Ever run in the LewisGale Salem Half? Share your impressions here, or post your review in the Comments below.