Runners in the half marathon start their race at Great Falls Park in nearby Sterling, Va., just over 30 miles from Washington.

From there, runners follow a combination of single- and double-track trails through the forests and hills of the park, much of which is run on dirt trails as well as gravel and a few sections of paved trail.

The race also includes some steep hills and changes in elevation throughout the course, with some sections climbing as much as 300 feet.

Those running in the half marathon portion of the race have four hours on the trail to finish their race, and are encouraged to run only the race that they are comfortably trained for and feel confident they can complete in the allotted time. 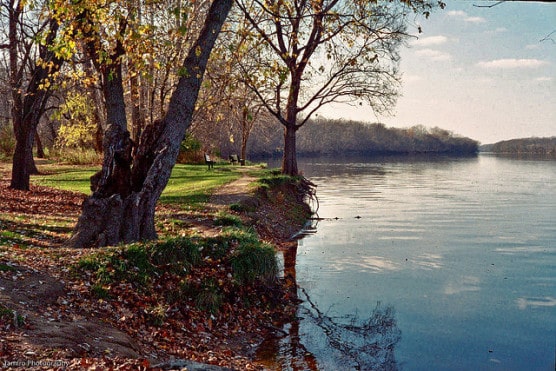 Algonkian Park along the Potomac River in Sterling, Virginia. (Photo by Tmmy Phtog/flickr)

Nestled along the banks of the Potomac River separating Virginia and nearby Washington, D.C., about 60 miles southwest of Baltimore and roughly 110 miles north of Richmond, Sterling typically sees mild to moderately warm weather in June, a month that has brought record temperatures as low as 36 degrees (in 1986) and as high as 97 degrees (in 1988).

To reserve your spot in the 2019 running of Sterling’s The North Face D.C. Endurance Challenge Half Marathon, 10K or 5K race, register online at Active.com here.

Ever run in the The North Face D.C. Endurance Challenge Half Marathon? Share your impressions here, or post your review in the Comments below.