Part of a series of half marathon races that got their start in North Carolina, the Race 13.1 Roanoke Half Marathon makes its third annual running this year here in this southwestern Virginia city that’s surrounded by the beautiful Appalachian Mountains and sits roughly at the half-way point of the Blue Ridge Parkway.

Runners will start all three race distances at the River’s Edge Sports Complex on Wiley Drive, which lies nearly a stone’s throw from the banks of the Roanoke River.

From there, runners will start off by crossing the bridge over the river and then they’ll join the Roanoke River Greenway, a running, walking and biking trail that will one day stretch more than 30 miles from western Roanoke County through the cities of Salem and Roanoke all the way to the Blue Ridge Parkway.

Most of the race — all but a few miles — unfolds along this riverside trail, which makes the course fast and flat nearly all of the way. The only real hilly stretches runners can expect to encounter lie around the mile 4 marker, where the course veers off the trail and onto Underhill Avenue. But it’s really the same hill, as runners will hit it both going out and coming back on this out-and-back course.

After that, runners cross over the river again and run alongside Tinker Creek until they make their way into Fallon Park, where the half marathon mid-way turnaround point lies. Once they make the turn, they retrace their steps along the route they’ve just run, all the way back to the River’s Edge Sports Complex for the race finish. 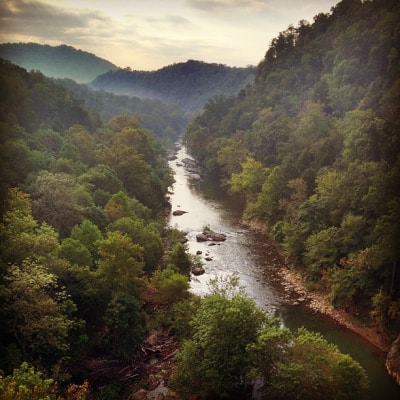 The Roanoke River as seen from the Blue Ridge Parkway. (Photo by TimothyJ/flickr)

Located in southwest Virginia, just south of Shenandoah National Park and roughly a 190-mile drive west from the state capitol Richmond, Roanoke typically sees June temperatures between 60ºF and 83ºF. The city sees an average rainfall of around 3.6 inches in the month of June

See the race route map for the Race 13.1 Roanoke Half Marathon here.

To reserve your spot in the 2017 running of the Race 13.1 Roanoke Half Marathon, 10K or 5K race, register online at the event website here.

Ever run in the Race 13.1 Roanoke Half Marathon? Share your impressions here, or post your review in the Comments box below.