What the race organizers describe as “non-technical, cushy” trails await inside the forests of Washington’s Dash Point State Park, which lies less than an hour’s drive south from Seattle along the shoreline of Puget Sound and where runners will make their way along an out-and-back course at the 9th annual Dash Point State Park Half Marathon & 10K Trail Run.

A trail race that’s part of a race series organized by 4th Dimension Racing, a locally-based race management company that organizes trail runs throughout the Seattle-Tacoma area like August’s Grand Ridge Trail Half Marathon in nearby Issaquah, the Dash Point Park races take runners mostly along the trails of this nearly 400-acre park, which offers gorgeous views of the nearby Vashon and Maury Islands as well as the Olympic Mountains off in the distance.

Runners will start the race in the park’s parking lot area just off Highway 509 (Dash Point Road), which lies just a short walk from the shoreline on Puget Sound, where visitors can take in both the beach and the wildlife, and where they may spot ducks, eagles, foxes and perhaps even coyotes.

From the start/finish area near the parking lot, they’ll head south across Dash Point Road and into the trails that wind through the park, which is bordered by residential developments on all sides.

The trails in the southern half of the park feature some long, gradual climbs — between the starting line and the mile 2 marker, the course elevation rises more than 400 feet — as well as some equally gradual downhill descents.

Once runners make it to the peak elevation just past the mile 2 marker, the course then unfolds along a very gradual descent over the next few miles, which runners in the half marathon will repeat a second time, as they’ll run the out-and-back loop course twice, while those running the 10K will run it a single time.

Following the registration and check-in on the morning of the race starting at 8:00 AM, and the starting time for the half marathon race is scheduled for 9:00 AM. Runners will have just over 4 hours to complete the half marathon, as the course will officially close at 1:30 PM.

Want to know what the course will look like in Dash Point State Park? You can check out photos posted by the race organizers at their Facebook page. 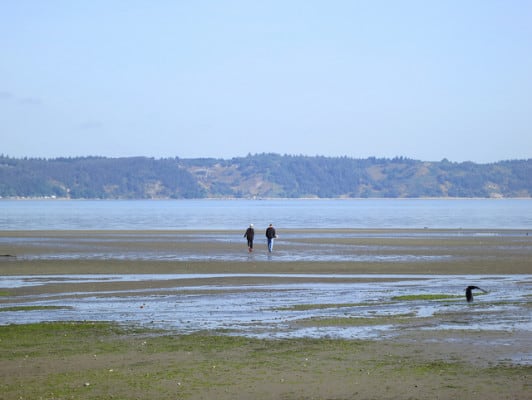 Strolling at low tide along the shoreline of Dash Point State Park near Tacoma, Washington. (Photo by Ruth Hartnup/flickr)

Located along Puget Sound in the state’s northwest corner, about 23 miles south of Seattle and just a few miles east of Dash Point State Park, Federal Way typically sees cooler, wetter weather in March, which has brought record temperatures here as low as 12°F (in 1955) and as high as 75°F (in 1966).

Ever run in the Dash Point State Park Half Marathon? Share your impressions here, or post your review in the Comments below.