DC Half & Half Marathon

Giving new meaning to the phrase “eat and run,” this fun, friendly race through Arlington, got its start a few years ago when a few friends who live now in the D.C. area had just gotten back from running the Krispy Kreme Challenge in North Carolina.

That race — in which participants run 2 1/2 miles to a Krispy Kreme store, eat a dozen doughnuts, and then run 2 1/2 miles back to where they started — inspired the friends to create a race in which you’d run 13.1 miles total, with 6 1/2 miles out and back to the eating station before running the second half of the race.

Their race, now known famously as the “DC Half and Half,” involves running from the starting line at Ben’s Chili Bowl in Arlington, Va., east along the Custis Trail and the Potomac River for the first three miles before turning around and heading back to Ben’s.

There, you’ll dig in to a “half-smoke,” which is popular in the Washington area and is a lot like a hot dog — though it’s “usually larger, spicier, and with more coarsely-ground meat, the sausage is often half-pork and half-beef, smoked, and served with herbs, onion, and chili sauce,” according to Wikipedia.

There you’ll have to have your appetite ready! You’ll down your half-smoke and then hop back onto the Custis Trail, this time heading west along a hillier out-and-back stretch than the first half of the course. (There will also be vegetarian options if you don’t want to eat the meat.)

Runners get to see some of the city’s best running trails and parks along the way, as you’ll run stretches of the Custis Trail and the Mt. Vernon trail with views of the Potomac River and Washington, D.C.

Proceeds from the race will go to support a wonderful cause: ScholarChips, which provides scholarship funding, peer support and mentoring for children whose parents are incarcerated. 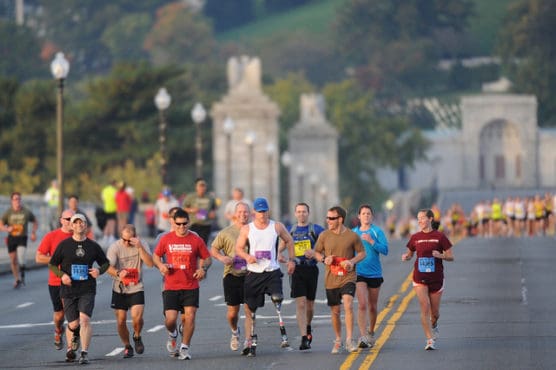 Runners make their way across the Potomac River in Washington, D.C. (Photo by U.S. Army/flickr)

Nestled along the Potomac River just across from Virginia, Washington, D.C., typically sees cool to occasionally quite cold weather in November, as well as its earliest traces of snow. Temperatures during the month average between the low 40s and the upper 50s.

See the race route map for the DC Half & Half Marathon here.

$55 and up for the half marathon

To reserve your spot in the 2021 DC Half & Half Marathon, register online at RaceEntry.com here.

Ever run in the DC Half & Half Marathon? Share your impressions here, as well as anything you learned about the race that you think other runners/walkers should know.