An estimated 15,000 runners are expected on the streets of the nation’s capital in April 2014 for the annual Nike Women’s Half Marathon DC, which takes runners on an out-and-back route that starts and finishes in front of the National Archives near the corner of 9th Street and Pennsylvania Avenue.

Editor’s Note: The Nike Women’s Half Marathon DC will not return in 2015. Here’s what Nike posted on its Facebook page in September regarding the race:

From there, the course winds its way past many of the most historic and iconic sites the city has to offer — the U.S. Capitol building and reflecting pool, the National Gallery of Art, the Smithsonian Natural History Museum, the National Mall and the Washington Monument, the Jefferson Memorial, the World War II Memorial, the Lincoln Memorial and back and forth across the Potomac River over the Arlington Memorial Bridge.

But that’s not it. Runners also make their way along the Potomac River out to Hains Point, which brings them back around the Washington Channel and then back into the city. Then it’s back past the Tidal Basin and into downtown, for a long stretch along 9th Street to the National Archives again, and the finish line back on Pennsylvania Avenue.

This being Washington, runners can expect a race without any big hills or steep climbs — nearly all of the course is fast and flat and run on paved roads, though there are a few rises here and there (like the ramp onto and off the Arlington Bridge).

All around, the streets will be filled with people cheering runners on — at the Nike Women’s Half website, the race organizers recommend the Lincoln Memorial, along Independence Avenue, the Jefferson Memorial, and Pennsylvania Avenue as the most popular places for friends and family to gather to cheer their wives, daughters, sisters, nieces, aunts, mothers, grandmothers and friends on.

Runners will have a course time limit of 4 hours, which means you’ll need to keep a pace of 15 minutes per mile or better in order to finish within the allotted time. If you can’t finish within that pace, race officials plan to provide transport vans to pick up runners along the course.

It’s important to note that the race doesn’t provide any parking at the start/finish area, so you’ll need to take the Washington Metro or a taxi (or be dropped off as close as you can) to make it to the starting line on time. 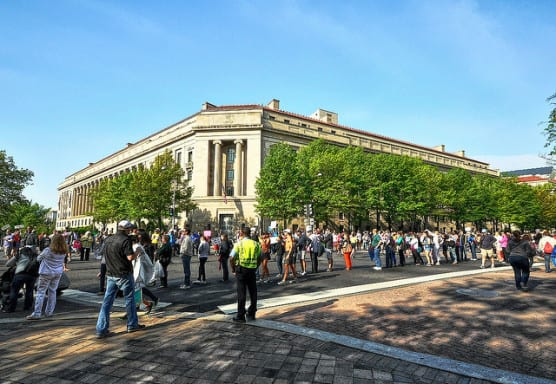 Along the course at the Nike Women’s Half Marathon DC in April 2013. (Photo by Forsaken Fotos/flickr)

Nestled along the Potomac River between northern Virginia and Maryland, Washington D.C. typically sees some of its mildest weather of the year in April, which has brought record temperatures here as low as 15°F (in 1923) and as high as 95°F (in 2002).

Applications for the 2014 Nike Women’s Half Marathon DC opened in November 2013, and runners were randomly selected in a lottery. Since then, registration has closed.

To reserve your spot in the spring 2014 running of Washington’s Nike Women’s Half Marathon DC, visit the event website.

Ever run in the Nike Women’s Half DC? Share your impressions here, or post your review in the Comments box below.