Girlfriends Run for a Cure Half Marathon

Set for its 16th annual running, Vancouver’s Girlfriends Run for a Cure Half Marathon is more than just a road race – it’s an event that seeks to both empower and encourage women as well as raise needed funds for breast cancer research.

The race is run as a benefit for the Oregon and Southwest Washington chapter of Susan G. Komen for the Cure, the nationwide nonprofit organization/network of breast cancer survivors and activists who help promote the cause through events like the organization’s annual 3-Day For The Cure, a 60-mile walking event that takes place in 14 cities across the United States from late July through mid-November each year.

The Girlfriends Half is an event that’s run very much in the same spirit, as many of the participants get dressed out in pink running shirts, shorts and caps for the race, which they are permitted to take part in any way they like – walking, jogging or running. And, as a special treat for the finishers, there’s chocolate at the finish line for every runner or walker who completes 13.1 miles.

The course for the race follows an out-and-back route that starts and finishes at the Wendy the Welder sculpture near Ryan Point (a departure from past events at the Vancouver waterfront to accommodate the ongoing development project).

From there, runners and walkers head out on what is mostly a fast, flat route through the city, trekking through areas around Pearson Field, as well as the riverfront trails along the Columbia River.

The first four miles of the race take runners through downtown Vancouver and on a loop along the northern edge of Pearson Field. This small airport near the southern edge of downtown and adjacent to Fort Vancouver, once served as a headquarters and supply depot for fur trading operations of the British-owned Hudson Bay Company, and later as a U.S. Army post, and today makes up the Fort Vancouver National Historic Site.

After making their way out to Wintler Community Park, the easternmost point of the race and the turnaround point, runners then head back west along the route they’ve just run, back along the riverfront trails and toward the finish line back at the Wendy sculpture. 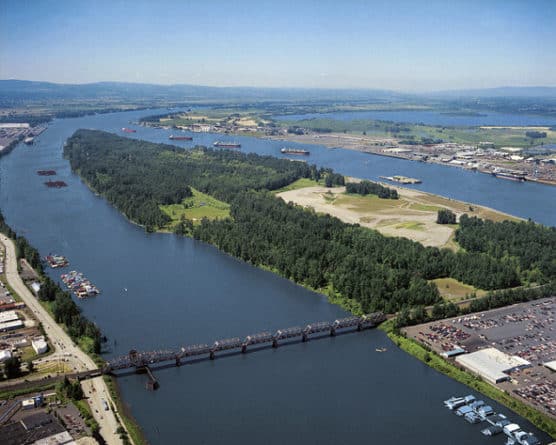 Aerial view of Hayden Island in the Columbia River, near Vancouver, Wash. (Photo by Sam Churchil/flickr)

Nestled along the north bank of the Columbia River in southwestern Washington, roughly 10 miles north of downtown Portland, Ore., Vancouver typically sees cool to mild weather in October, which has brought record temperatures here as low as 19°F (in 2002) and as high as 90°F (in 2007).

See the race route map for the Girlfriends Run for a Cure Half Marathon.

To reserve your spot in the 2023 running of Vancouver’s Girlfriends Run for a Cure Half Marathon race, register online at RunSignUp.com here.

Ever run in the Girlfriends Run For a Cure? Share your impressions here, or post your review in the Comments below.