The Great Ferry Race Half Marathon

Set for its fourth annual running this summer along the rural highways of this gorgeous island in Puget Sound just off the coast of Seattle, where you’ll start by riding a ferry out across the water to the starting line, the Great Ferry Race features a half marathon that race organizers say is truly “like no other.”

Surrounded by the Olympic Mountains to the west and Mount Rainier off in the distance in the southeast, Bainbridge Island offers a beautiful backdrop to run against, away from the hustle and bustle of the city.

You’ll start the race by boarding the ferry in downtown Seattle, and then riding across Puget Sound for roughly 35 minutes, taking in the beauty of the water and the stunning peaks in all directions.

Once you make it to Bainbridge Island, you’ll get off the ferry at the terminal and walk onto the island, starting the race on Waterfront Trail. That will lead to stretches through the city and a long stretch along Madison Avenue, which will take you up to New Brooklyn Road and then west, further into the island’s interior.

Along the way, you’ll get to take in the views of this picture-perfect island, running through or past a few local parks like Grand Forest East and Grand Forest West, with gentle rolling hills throughout. Organizers note there’s about 1,400 feet of overall elevation gain throughout the race’s 13.1 miles, so come prepared for hills.

The course features about two-thirds paved roads and one-third trail, as you’ll head off-road in stretches, especially just past the half-way point of the race in Battle Point Park.

Once you make the loop around Battle Point Park, you’ll start heading back into the city of Bainbridge Island, back where you began, and then cross the finish line in front of the Bainbridge Island Historical Museum. 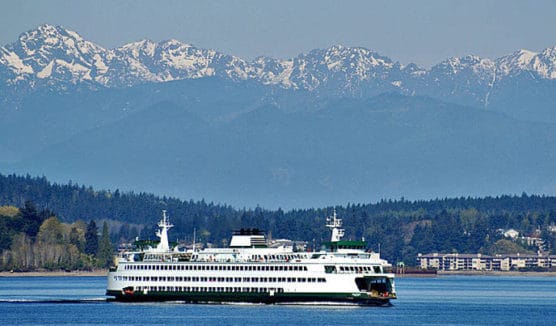 Nestled just off the coast of Seattle in Puget Sound, roughly a half-hour ferry ride from the city, Bainbridge Island typically sees mild and sometimes warm temperatures in June, which also brings one of the island’s driest month of the year with just over 1.5 inches of rainfall.

See the race route map for the Great Ferry Race Half Marathon here.

To reserve your spot in the 2023 running of the Great Ferry Race Half Marathon, register online at RunSignUp.com here.

Ever run in the Great Ferry Race Half Marathon? Share your impressions here, as well as anything you learned about the race that you think other runners/walkers should know.