Runners get to enjoy the fast and very flat gravel surface of Washington State’s East Lake Sammamish Trail at the annual Lake Sammamish Half Marathon, which welcomes a few hundred runners every year for a race that unfolds along the trail that stretches between two local parks along the lake here in this suburb of Seattle, Wash.

While in the past the race also offered a full, 26.2-mile marathon, since 2011 only the half marathon distance has been offered. Those running the half will start their race at Lake Sammamish State Park at the lake’s southern end, and follow the trail along the lake’s western shoreline all the way northward up to where the finish line lies, in Marymoor Park.

The first two miles of the race unfolds entirely within Lake Sammamish State Park, along the trails that wind through the park, and then runners head out North Sammamish Road.

From there, the course takes runners east toward the trail, which they enter just after passing by the mile 3 marker. Along the route, the half marathon route features gravel surfaces for most of the course (runners will encounter some paved surfaces near both the beginning and the end of the race).

The trail, which stretches 11 miles from Marymoor Park south to the town of Issaquah, lies in the bed of a former railroad and opened in 2006 as a recreational trail for running, walking and biking.

Though there are some gentle rises in elevation over the course of the 13.1-mile half marathon route, runners can expect a mostly flat course for virtually the entire race, organizers note, as this was a large part of the appeal of the route for the marathon and half marathon. 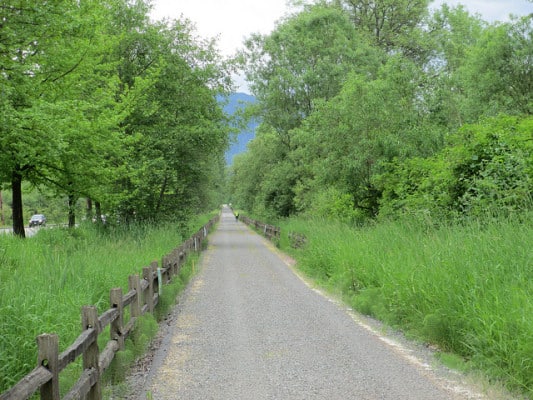 A stretch of the Lake Sammamish Trail as it runs into Issaquah, Washington. (Photo by Robert Ashworth/flickr)

Located in the northwest corner of the state, just a few miles southeast of Redmond and roughly 20 miles east of Seattle, Sammamish typically experiences March temperatures between 37°F and 54°F. Precipitation is plentiful here in the spring, with an average of just over 6.2 inches of rainfall for the month.

Lake Sammamish Half Marathon Past Results

See the race route map for the Lake Sammamish Half Marathon here.

To reserve your spot in the 2023 running of Washington’s Lake Sammamish Half Marathon, register online at RunSignUp.com here.

Ever run in the Lake Sammamish Half Marathon? Share your impressions here, or post your review in the Comments below.