More than 3,000 runners and walkers crossed the finish line last year at the springtime running of the Mercer Island Half Marathon, which also features 10K and 5K road races, all designed to help raise funds and awareness to fight colon cancer and to benefit an array of other charitable causes supported by the local Mercer Island Rotary Club Foundation.


While the 10K race is for runners only, both the 13.1-mile half marathon and the 5K welcome walkers as well as runners, and the event also includes a half-mile Kids’ Dash race.

From the starting line on the outskirts of Luther Burbank Park on the northern end of the island, the race unfolds along an out-and-back course that takes a clockwise loop around the island and features a wealth of rolling hills along the way, as well as a few steep uphills and downhills.

This stretch of the race is among its most winding and hilly, as runners make the gradual climb up East Mercer Way, winding left and right as the roadway curves with the shape of the land. Runners stay on East Mercer all the way down to the southern tip of the island, passing through Clarke Beach Park along the way, until East Mercer becomes West Mercer Way.

There, runners begin the second half of the race that takes them northward along the western shore, where they can see Seward Park across the lake as they make their way along the winding route.

The race’s biggest hills — as well as its steepest downhill stretches — occur in the second six and a half miles of the race, as runners hit the peak point in the race by about the 9.5-mile point in the race, where the elevation reaches about 225 feet above sea level.

After that, it’s mostly downhill (except for another steep hill just as runners are passing through miles 11 to 12) as the race finishes back near the park. 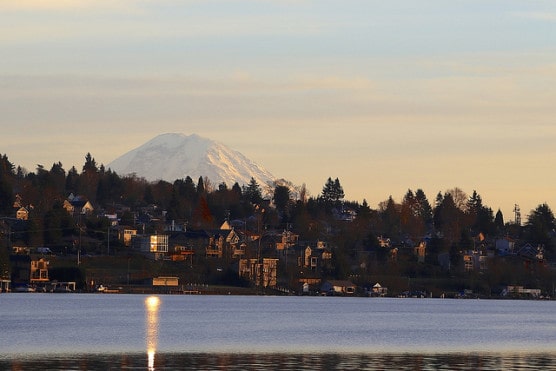 Nestled in the middle of Lake Washington between Seattle and Bellevue, Mercer Island typically experiences moderately cool to occasionally cold weather conditions in the early spring, as well as fairly frequent showers. In March, the island’s temperatures average between 38°F and 54°F, while precipitation amounts average around 3.84 inches for the month.

See the race route map for the Mercer Island Half Marathon here.

To reserve your spot in the 2019 running of the Mercer Island Half Marathon, 10K or 5K race, check the event website for the latest updates.

Ever run in the Mercer Island Half Marathon? Share your impressions here, or post your review in the Comments below.