One of the Pacific Northwest’s biggest big-city marathon and half marathon events, the Amica Insurance Seattle Marathon, Half Marathon & 5K draws a field of more than 5,000 runners and walkers for all of its events combined each year, including more than 3,000 finishers in the half marathon alone.

Run each year on the Sunday after Thanksgiving, this event takes participants on a course through Seattle’s city streets in the shadow of the famed Space Needle and features beautiful views along the course of nearby Lake Union and Fremont Cut, as well as an elevation profile that alternates between moderately hilly and long, flat stretches.

Runners and walkers in both the full and half marathons start the race downtown at the Seattle Center, just a few blocks away from Elliot Bay to the north and Lake Union to the east.

From there, runners head out on a counter-clockwise out-and-back loop through the city, hitting some rolling hills in the first few miles along 5th Avenue.

Upon reaching Cherry Street and the Sky View Observatory, runners turn left and head north onto the Interstate 5 express lanes, which have been cleared of traffic for the race. With the exception of a brief hill near the mile 4 marker, this stretch of the course is almost all downhill, letting runners cruise just like the cars — but without the cars.

After crossing the bridge and stepping off the highway, full marathoners continue northward into the University District, home of the University of Washington. But it’s westward bound for half marathoners, who head into the Fremont neighborhood of Seattle and enjoy beautiful (and flat) views of Lake Union through much of the next few miles until reaching the turnaround point near the mile 9 marker. Known for its history of counterculture, the neighborhood has since become home to breweries, technology companies, and the famous Fremont Troll — an 18-foot tall statue of a troll crushing a Volkswagen Beetle– which runners pass after completing an uphill stretch near the mile 11 marker.

The second bridge crossing leads runners back into the Queen Anne neighborhood, where the final two miles of the course unfold along Aurora Avenue before crossing the finish line at Memorial Stadium. 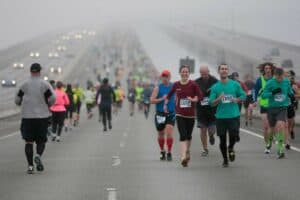 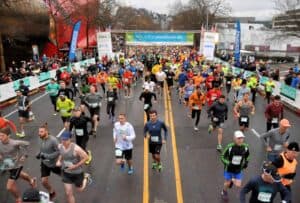 Famous for its reputation as one of the nation’s rainiest cities, Seattle lives up to that reputation with its late fall weather, as November is the city’s second-wettest month with almost 5.4 inches of average precipitation.

See the race route map for the Seattle Half Marathon here.

To reserve your spot in the 2023 running of the Seattle Marathon & Half Marathon, register online at RaceRoster.com.