Home nearly a century ago to a seminary for the Sulpician Order of Catholic Priests, the 316 acres along the shoreline of Lake Washington that today make up Saint Edward State Park are filled with miles of trails through dense forests and along the lakeshore, as well as the historic architecture of St. Edward Seminary, whose massive main building lies in what today is the center of the park.


That’s where runners will start the out-and-back course for the race, which consists of one loop for those running the 10K and two loops for the half marathon. From the parking lot area near the park’s headquarters and visitor center, runners head out onto a series of trails that wind through the park, starting with the Arrowhead and Juanita trails near the park’s eastern edge, which parallel Juanita Drive and Seminary Drive.

After that, the course heads back toward the starting line area and then out onto the trails that head toward the lake’s shoreline: the N Trail first, followed by stretches along the Beach Trail, South Ridge Trail, Plateau Trail, Seminary Trail, Grotto Trail, Perimeter Trail and Orchard Loop Trail, before the course heads back toward the onetime seminary with a final stretch along the Perimeter Trail before reaching the halfway point.

Then runners — in the half marathon at least — do it all over again. If you’re running the 10K, you’re just about to cross the finish line. Here’s how the race organizers describe the course:

“The route is mostly on the forest trails but also tours the grassy areas surrounding the historic seminary buildings to connect the forest trail loops. There is a nice mix of wider, straighter trails and narrower, winding trails. The course loop has two big hill climbs, but there are many flat or rolling sections, too.” 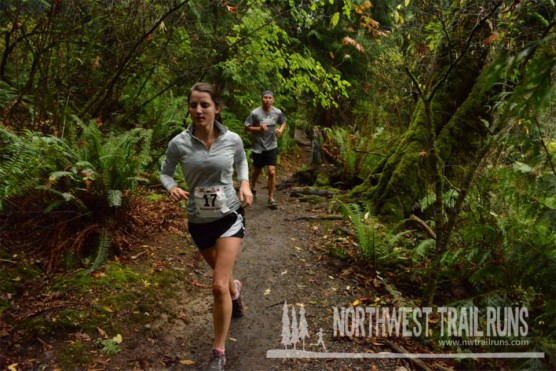 On the trails at the 2013 St. Edward Harvest Half. (Courtesy Northwest Trail Runs)

Located along the northern shore of Lake Washington in northwest Washington state, about 14 miles north of Seattle, Kenmore typically sees October temperatures between 47ºF and 60ºF, while rainfall amounts average just over 3.4 inches, making it Kenmore’s sixth-wettest month of the year.

Here’s how the race organizers put it: “Rain showers are also possible — though locals know that ‘rain’ in the Pacific Northwest is usually a drizzle and not a downpour.”

To reserve your spot in the 2017 running of Kenmore’s St. Edward Harvest Half Marathon or 10K race, register online at WebScorer.com here.