One of a series of races organized throughout the year by the locally based Clark County Running Club, Washington’s Vancouver Lake Half Marathon takes runners on an out-and-back course along the roads and trails of Vancouver Lake Regional Park, a 230-acre park that’s perhaps best known for its water sports and recreation, like swimming, canoeing, kayaking and windsurfing.


Between 300 and 400 runners cross the finish line each year at the race, which depending on the weather in the days leading up to it can be cold and snowy, or cold and windy (or both). Runners will start the half on Reiger Road right in front of the park, and follow the route first northward along the highway up to the race’s first turnaround point, between the first and second mile markers near Buckmire Slough.

The course follows the trail as it bends around the road and heads northward, following it all the way to the race’s second turnaround point, which occurs at nearly the mile 6 marker and takes runners to the sandy beach and looks out onto the Columbia River, where runners can look over into Oregon from the beach.

The course then heads back along the same route runners have just run, taking them from the beach area back to Lower River Road, all the way south and then northward again onto Reiger Road, which they follow all the way to the same turnaround point they hit in the race’s early going, which at this point occurs just before the mile 10 marker.

After making the final turnaround, runners then head back southward along Reiger Road to the entrance to Vancouver Lake Park, which they follow and run the bike paths through the park’s tree-lined meadows to the finish line at the park’s north picnic shelter.

With only mild and occasional uphills and downhills, the course is described as mostly very flat by the race organizers. The race begins at 10:00 AM, and runners are asked to finish the race within 3 hours and 15 minutes, as the course will close officially at 1:15 PM. 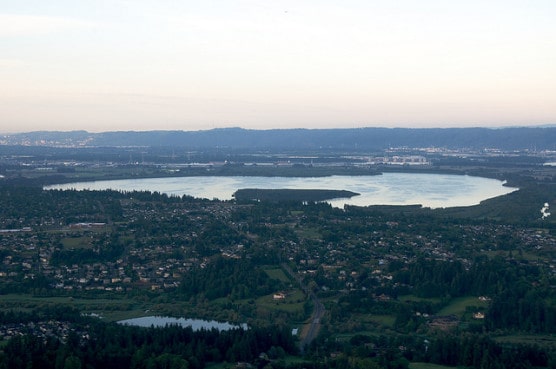 Located near the southeastern corner of Washington State, roughly 9 miles north of Portland across the Oregon state line, the city of Vancouver typically sees some of its coldest and wettest weather of the year, on average, during the month the race is held.

See the race route map for the Vancouver Lake Half Marathon here.

To reserve your spot in the winter 2017 running of the Vancouver Lake Half Marathon, register online at the race website here.

Ever run in the Vancouver Lake Half Marathon? Share your impressions here, or post your review in the Comments box below.