After more than three decades of taking runners along the streets and hills of this northern West Virginia city, in the state’s northern corner between Ohio and Pennsylvania, Wheeling’s Ogden Newspapers 20K Classic Run & Walk added seven tenths of a mile to its distance in 2011 to become the Ogden Newspapers Half Marathon Classic, which makes its 44th annual running this year.

Also featuring a 5K, 1-Mile and Kids Run races, the Ogden Half Marathon Classic is open to both runners and walkers and will also offer a two-person relay race for the 13.1-mile race.

Runners and walkers in the half will follow nearly the exact same course as the one that has been used for years in the previous 20K race. A challenging and hilly route, the course will take runners on an out-and-back loop course here in this Ohio River Valley city and out into the nearby communities of Bethlehem and Elm Grove, before bringing them back into Wheeling for the finish.

The race starts and finishes at WesBanco Arena, the home of the Wheeling Nailers ECHL hockey team that overlooks the Ohio River flowing by and Wheeling Island right across the river. From there, the course starts out by taking runners and walkers south through the city streets, across the waterway that feeds into the river, past the Wheeling City Centre Market and then south toward Interstate 470.

Runners next head under the highway along 29th Street and then meet up with Valley Boulevard, where the course hits its first (and by far its largest) hill, a stretch between miles 3 and 4 that rises more than 500 feet in elevation.

The hill peaks just after runners pass the mile 4 marker, and the course then takes an equally steep downhill slope as it heads through Bethlehem along East Bethlehem Boulevard, which becomes Evelyn Avenue.

After runners make the turn from 88 onto Highway 40 and start the second half of the race, they begin a long stretch that brings them northward and westward along 40 until they turn left just past the campus of Wheeling Jesuit University. The final few miles bring them back into downtown, for the finish line back at WesBanco Arena. 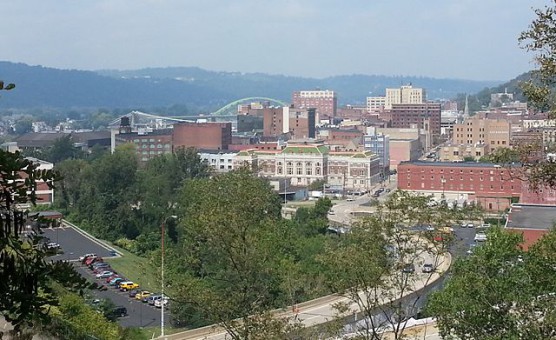 Located along the winding Ohio River in West Virginia’s northernmost corner, right along the border with Ohio and just 60 miles southwest of Pittsburgh, Pa., Wheeling typically sees mild to moderately warm weather in May.

See the race route map for the Ogden Newspapers Half Marathon here.

To reserve your spot in the spring 2023 running of Wheeling’s Ogden Newspapers Half Marathon Classic, Relay or 5K or fun run races, register online at Enmotive.com here.

Ever run in the Ogden Newspapers Half Marathon? Share your impressions here, or post your review in the Comments below.