One of the country’s truly unique marathon and half marathon events — and one that perhaps shows the doggedness and stick-to-it-iveness of the runners who are willing to take part in this event during the dead of winter — Milwaukee’s Pettit Indoor Marathon & Half Marathon (former known as the Icebreaker Indoor Marathon) is exactly that — a race that’s run indoors.

How is it run indoors, you might ask? For that, the organizers turned to one of the area’s premier sporting facilities, the Pettit National Ice Center, which serves as the U.S. Olympic Training Facility for speed skating. Many of the sport’s biggest American names have trained there, from Bonnie Blair and Dan Jansen to Shani Davis and Apolo Anton Ohno.

For the marathon and half marathon, runners will make (quite) a number of loops on 443-meter track laid around the ice rink — 47.5 loops for those running the 13.1-mile half marathon, versus 94.8 laps for those running the full, 26.2-mile marathon. The track surface is made of concrete covered by a thin layer of rubber, organizers explain, and the temperature inside the arena is generally kept at about 55°F.

Runners are discouraged from wearing headphones and iPod music players during the race — instead, because the race takes place indoors, organizers play music for the runners throughout the race. The race director takes requests from participants and also mixes in songs of his own choosing, to entertain, enliven and inspire runners as well as the spectators, who watch from the bleachers looking over the track, just like spectators at a hockey game or a speed skating event.

Just over 350 runners completed the full marathon, 5K and the half marathons combined in 2016, in addition to nearly 100 marathon relay teams, consisting of two to four runners each. The 5K takes place on Friday night before the Saturday morning running of the half marathons, which start at 7:00 AM.

The Pettit Indoor Marathon features two consecutive half marathons, the first of which starts at 7:00 AM and the second starts at 10:00 AM. 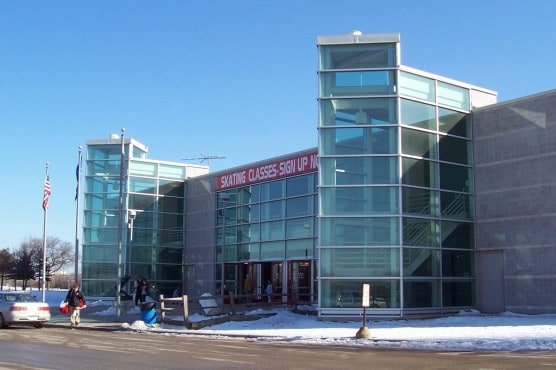 Outside the Pettit National Ice Center in Milwaukee, Wis. (Photo by Wikimedia)

It’s a good thing this race is held indoors, because as you might imagine Milwaukee is usually a very cold place to be in February — temperatures average between the low 20s and the mid-40s for the month, and frozen precipitation is always a possibility for this time of year.

To sign up for the winter 2023 running of Milwaukee’s Pettit Indoor Marathon, Half Marathon, or Marathon Relay race, register online at RaceRoster.com here.

Ever run in the Pettit Indoor Half Marathon? Share your impressions here, or post your review in the Comments box below.