Note: The 2020 event has moved to Nashotah Park.

Runners get the chance to trek along glacier-carved terrain that’s more than 10,000 years old at the Lapham Peak Trail Races Marathon, Half Marathon & 7-Miler, all of which are set to take place this September in the Lapham Peak unit of the Kettle Moraine State Forest, along an out-and-back loop route along the park’s Moraine Ridge trail.


Made up of a number of separate park units throughout southeastern Wisconsin near Milwaukee, the Kettle Moraine State Forest is connected by the 115-mile-long Kettle Moraine Scenic Drive, along which visitors can get a glimpse from their car of the hilly terrain throughout the park.

It was created when a glacier that covered Wisconsin thousands of years ago receded, leaving behind what are now some of the state’s most popular hiking, mountain biking and cross-country skiing trails spread across its approximately 30,000 acres.

Runners in all distances will converge on the starting line area at Lupo Pond inside the Lapham Peak Unit, which lies just south of Delafield. (The Kettle Moraine southern unit stretches as far south as Whitewater, Wis., while the park’s northern unit reaches nearly all the way to the town of Plymouth, to the west of Sheboygan.)

Organizers note that the trail itself is wide (about 12 to 15 feet wide in most places), but it’s also challenging — there are a few short, steep hills and some longer hills runners must climb, with some flat terrain thrown in.

In their first loop of the race, runners in the full and the half marathon will make their way to the top of the park’s 45-ft.-high observation tower, which stands at over 1,200 feet, making it the highest point in Waukesha County.

They’ll climb the steps of the tower on their first loop only, however — the second loop of the half marathon, and none of the other three loops of the full marathon, include the run to the top of the tower. 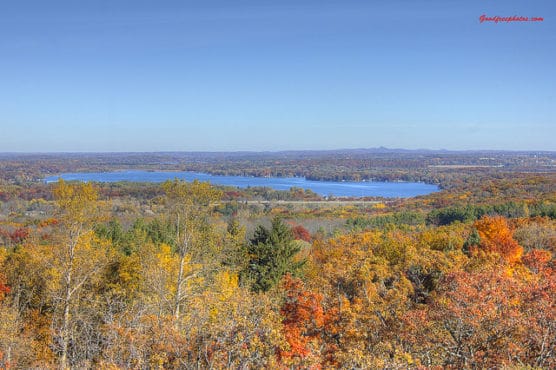 The view from the Lapham Peak tower in the Kettle Moraine State Forest. (Photo by Yinan Chen/flickr)

Nestled along the southwestern corner of Nagawicka Lake in southeastern Wisconsin, about 27 miles west of Milwaukee, Delafield typically sees its second-wettest month of the year in September, which has brought record temperatures here as low as 26°F (in 1949) and as high as 98°F (in 1953).

See the race route map for the Lapham Peak Trail Half Marathon here.

To reserve your spot in the 2020 running of Delafield’s Lapham Peak Marathon, Half Marathon, 63K or 7-Mile trail races, register online at RunSignUp.com here.

Ever run in the Lapham Peak Trail Races? Share your impressions here, or post your review in the Comments below.