The Wisconsin capital city known as the “City of Four Lakes” is the backdrop for the Madison Half Marathon Run/Walk & Twilight 10K — formerly the Madison Marathon, Half Marathon & 10K, which has now been split into two separate events.

For the spring half marathon, which usually draws more than 3,000 runners each year, the course takes runners through Madison’s downtown, takes runners who participate in either the full or the half marathon past the waters of two of those four lakes — Lake Mendota and Lake Monona, as well as the smaller Lake Wingra and the Monona Bay.

From the starting line at Madison’s Capitol Square — where all three races start — runners follow the half-marathon course out along Expo Way and then onto West Washington Avenue and again onto Regent Street, for a straightaway stretch that lasts several blocks until the route reaches Breese Terrace, where runners turn right and head along the shoreline of Lake Mendota.

As runners are reaching the mile 4 marker, they turn right onto Observatory Drive and then left onto Babcock Drive, and follow Babcock as it curves around with the direction of the lakeshore toward the waterfront.

The route heads out onto the tree-lined trail along the waterfront, taking runners along the shore of the massive Lake Mendota, skirting the lakeshore closely for roughly the next half-mile, all the way until reaching Langdon Street, where runners turn left and head away from the water.

Langdon Street takes the field around the edge of campus and along Gilman and Gorham Streets, where runners exit the campus and head down to the next stretch of the race that takes them past James Madison Park and Tenney Park.

Runners pass around the northern end of Tenney Park and then head across Thornton Avenue toward Lake Monona, where runners follow the course along the edge of the bay on the bike path that parallels John Nolen Drive, to the finish line back at Capitol Square.

Note: The half marathon is held Sunday morning, while the 10K and 5K races are run on Saturday evening. 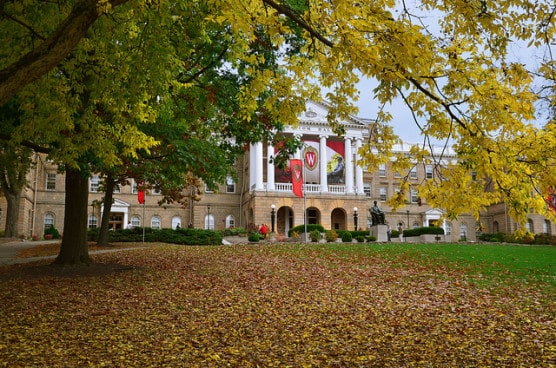 The University of Wisconsin campus in Madison, Wis. (Photo by Richard Hurd/flickr)

Located in the southernmost part of the state, about an hour and a half drive west from Milwaukee, Madison typically sees mild to moderately cool weather in the mid-spring, with heavier rainfall than the winter months.

See the race route map for the Madison Half Marathon here.

To reserve your spot in the 2016 running of the Madison Half Marathon or Twilight 5K or 10K race, register online at RunSignup.com here.

Ever run in the Madison Half Marathon? Share your impressions here, or post your review in the Comments below.

See more races in: May, Wisconsin