Known for its steady and challenging uphill stretches that await runners along the first few miles of the course, the Rails to Trails Marathon, Half Marathon, 5K & 1-Mile Fun Run takes runners and walkers on a tour of the Elroy Sparta State Trail that winds through this corner of southwestern Wisconsin.

A former railroad that’s been converted into a 32-mile paved recreational trail that winds through the small towns and countryside areas of southwestern Wisconsin between towns of Elroy and Sparta, the paved trail features three long tunnels that hikers, walkers, bikers and runners can pass through — one of which runners will run through during the race.

All four races in the event start and finish at the Norwalk Village Park on State Highway 71 in the town of Norwalk. From there, participants follow the course along a northwestern route up and out of the center of town out along the trail, and encounter what are perhaps the course’s most significant hills in the first four miles of the race.

Shortly after crossing the mile 4 marker, runners enter the longest tunnel along the entire Elroy Sparta Trail, which is roughly three quarters of a mile long.

As they’re about to enter the tunnel, course volunteers hand every runner a flashlight to carry with them through the tunnel to light their way, which they can drop off on the other end and pick up once again on the return during the second half of the race.

Open to both runners and walkers, the half marathon starts at 9:00 AM, and follows an out-and-back route that turns around at about the half-way point of the full marathon course, and then runs back through the tunnel a second time for the finish in Norwalk Village Park. 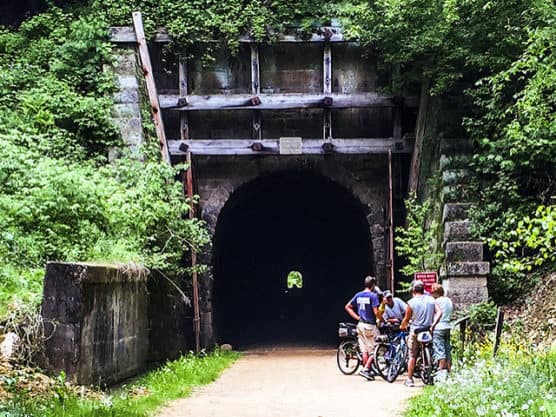 The entrance to one of the tunnels on the Elroy Sparta State Trail in Norwalk, Wis. (Photo by Kenneth Casper/flickr)

Located in the southwestern corner of the state, just over 40 miles from the border with Minnesota and about 2 1/2 hours from Madison, the town of Norwalk typically experiences cool to mild weather conditions in the mid-fall season, with occasional wet or frozen precipitation.

See the race route map for the Rails to Trails Half Marathon here.

To reserve your spot in the 2023 running of the Rails to Trails Marathon, Half Marathon & 5K, visit the event website below.

Ever run in the Rails to Trails Half Marathon? Share your impressions here, or post your review in the Comments below.