Set for its 6th annual running this Labor Day holiday weekend along a route that circles Madison’s Lake Monona nearly the entire way around, the Rockin’ Brews Half Marathon (formerly Rockin’ Chocolate Half Marathon) will feature both music and craft beers: live bands playing at stations along the course, and a bevy of breweries with samplings of their wares at the finish line.

Runners start the loop course near the edge of the lakeshore at Winnequah Park, along Nichols Road. From there, the clockwise loop route heads south along Squaw Bay and then west along Waunona Way, past Turville Point Conservation Park and along the Capital City Trail, which crosses over the bridge at Monona Bay.

The course keeps heading north and then turns east when it turns onto the Madison Isthmus and reaches the Wisconsin State Capitol, whose famous domed building is also the tallest building in Madison — by law, actually, as no buildings taller than the dome can be built in the city.

The race continues northward and eastward along the lakeshore until it reaches the Olbrich Botanical Gardens, where you’ll be able to see the entrance to the gardens as you pass by as well as the famed glass pyramid structure of the Bolz Conservatory, a giant greenhouse filled with more than 500 species of tropical and sub-tropical plants.

The final few miles of the race bring runners along Winnequah Road, where they’ll pass by Waterman’s Park and Tonyawatha Park before heading through Firemen’s Park, on the way back to the race finish line along Nichols Road. 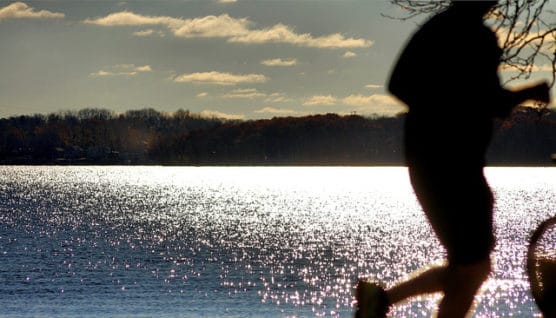 A runner makes his way along Madison’s Lake Monona at the Madison Marathon. (Photo by Phil Roeder/flickr)

Nestled along an isthmus of land sandwiched between Lake Mendota and Lake Monona in southern Wisconsin, roughly 145 miles northwest of Chicago, Madison typically sees mild to warm weather in early September, when temperatures average between the high 50s and the high 70s.

See the race route map for the Rockin’ Brews Half Marathon here.

To reserve your spot in the 2023 running of Madison’s Rockin’ Brews Marathon or Half Marathon (or relay) race, register online at RunSignUp.com here.

Ever run in the Rockin’ Brews Half Marathon? Share your impressions here, as well as anything you learned about the race that you think other runners/walkers should know.