Set for its 7th annual running, the Grand Teton Half Marathon is set to take runners on a high-elevation, point-to-point climb through Wyoming’s Jackson Hole area, where they’ll cross the Snake River twice and finish within sight of the majestic Teton Mountain range, just south of the national park for which they’re named.

Runners should note that the won’t actually run within the confines of Grand Teton National Park during the race — they’ll run just south of the park’s southern entrance, between the small town of Wilson and Jackson Hole Golf and Tennis Club, where they’ll cross the race finish line at the golf course’s driving range.

The race will start along Beckley Park Way just off the Teton Pass Highway, and from there runners will make a loop around Jackson Hole Community Parkway, 3rd Street and the Teton Pass Highway before they make their first crossing over the Snake River, at the bridge that parallels the highway.

This stretch is virtually all flat for the first four miles, and runners really don’t hit their first hill until just before the mile 5 marker along the Teton Pass Highway. That’s when the slow-but-steady climb begins over the next several miles, which unfold along Spring Gulch Road.

It’s a very gradual climb, however, for the second half of the race, as the elevation of the course rises from a low of just over 6,100 feet above sea level around the midpoint of the race to about 6,350 feet by the time runners reach the finish line.

The challenge, of course, will come from the high elevation itself, which is much higher than most U.S. cities. That’s why the race organizers have put together some tips here about running and racing at high altitudes.

All along the route, the views are said to be breathtaking, with the stunning Tetons off in the distance. The race is open to walkers as well as runners, as long as you can finish within the 4-hour cutoff time.

See the official race website here about where to stay, and how to get to and from the race’s start and finish lines. 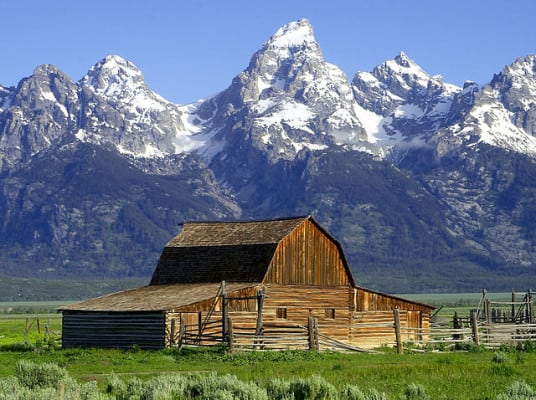 The John Moulton barn at the base of the Tetons. (Photo by Wikimedia)

Located just across the Snake River from Jackson and near the southern end of Grand Teton National Park, Wilson (where the race starts) typically sees some of its warmest and driest weather of the year in June, which has brought record temperatures here as low as 19ºF (in 1979) and as high as 95ºF (in 1988).

See the race route map for the Grand Teton Half Marathon here.

To reserve your spot in the 2023 running of Jackson’s Grand Teton Half Marathon, register online at RunSignUp.com.

Ever run in the Grand Teton Half Marathon? Share your impressions here, or post your review in the Comments below.