10 of the Flattest, Fastest Half Marathons on the East Coast 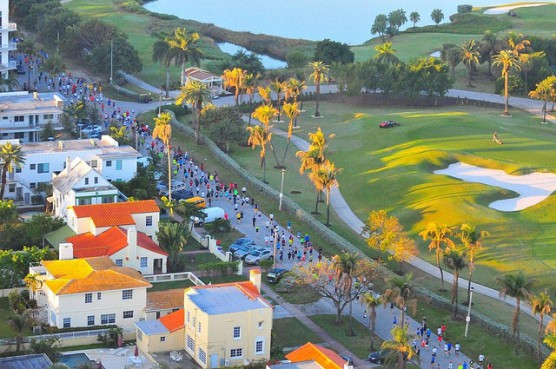 Runners make their way down a Miami Beach street in the 2011 13.1 Marathon Miami Beach. (Photo by Curtis Alan Jackson/flickr)

Last week, we showed you some of the flattest and fastest half marathons on and near the West Coast, in places like California, Arizona an»d Utah. This week, we turn our attention to the East Coast:

You can’t get much flatter than running along Atlantic Avenue in Virginia Beach. The race does have a slight incline along Shore Drive, but is so slight that most runners won’t notice. Celebrate a new PR with a killer post-run beach party sponsored by Yuengling.

The Jersey Shore Half Marathon is steeped in distance racing tradition. The Jersey Shore Marathon was an extremely popular road race in the 1970’s and became a half marathon in 1986. This flat course located at sea level offers runners views of the New York Harbor and the Sandy Hook Lighthouse.

There isn’t usually much reason to visit the beach in December, but the Rehoboth Beach Seashore Half Marathon is definitely a great one. The weather is cool, the course is flat, and PRs are definitely likely. Sign up early because this small race sells out quickly.

With 5 miles of oceanfront running and only 7 turns over 13.1 miles, the Myrtle Beach Mini Marathon lives up to its promise of being fast and flat. The point-to-point pancake flat course is actually almost a loop and runners finish just steps away from the ocean. Plus, runners will be able to enjoy surf bands both on the course and at the post-race beach party.

The loop course of the Wrightsville Beach Half Marathon travels through the Wrightsville Beach waterfront and is touted by race directors as being fast and flat. Marathoners flock to this course with hopes of qualifying for Boston as conditions are wrought for speed. Racers will be encouraged to stay fast by the spectator hotspots and NCAA-themed cheer stations.

6) Race The Runways Half Marathon • Brunswick, ME

The Race The Runways Half Marathon has the unique distinction of running a race on an actual airport runway in Brunswick, Maine, as three miles of this incredibly flat course are run on the former U.S. Naval Air Station Brunswick. Though headwinds have sometimes proven to be fairly fierce during the race, the tailwind is just as incredible. Sign up early as this unique race sells out quickly.

The Cheshire Half Marathon is a medium sized race with huge PR potential. The flat and fast course is a large loop that travels sections of the scenic Farmington Canal Trail. Runners looking to get the taste of a the half marathon, but who aren’t yet ready for the distance can sign up for the two-person half marathon relay.

Traveling the Block Island Sound, the Surftown Half is not only pretty flat and fast, but it is gorgeous too. Runners will be able to race past rocky coastlines, Victorian summer homes, oceanfront marshes, and beautiful cottages. There are a few tiny elevation changes, but runners never go above 50 feet above sea level in elevation anywhere along the route.

Located on the gulf side of Florida, Sarasota is a beach town and home of the Sarasota Half Marathon. The loop course at sea level travels through natural and historic attractions and offers beautiful beach views. Collect your dolphin finisher medal (and maybe a new PR!) before enjoying a gourmet breakfast at the post-race party.

For a race that takes place in suburban Atlanta in early November and starts at 5:30 PM, this half marathon is memorable for many reasons. Runners will need a headlamp to run their 13.1 miles through Roswell’s Riverside Park — which lies just outside Atlanta — in the dark. But local runners flock to this race to enjoy one of the few spots in the region with minimal hills.

Next post: Running Outreach Helps Homeless Get ‘Back on Their Feet in No Time’ By the Thousands

Previous post: 5 Holiday Halfs You Can Run a Month From Today