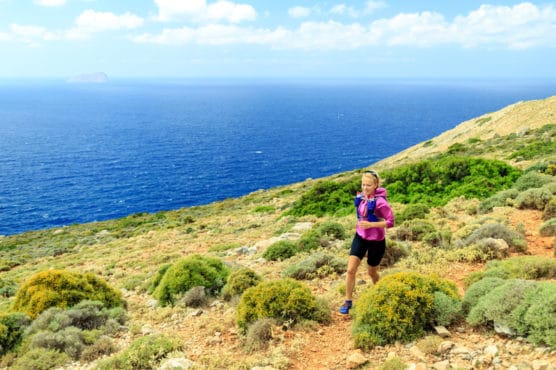 The route starts from the town of Kalampaka, situated at the foot of Meteora, a UNESCO World Natural Heritage monument. Runners then follow a point-to-point course with a net downhill of over 300’ and finish in the central square of Trikala city. Held in mid-March, this fast course full of Greek history could be the race for your next PR.

In mid-March, the annual Athens Half Marathon takes place in the ancient city of Athens, Greece. The two loop course takes runners past some of the most iconic historical sites in Athens, include the Acropolis and the modern-day Olympic Stadium. Though the course has a few climbs along the way, the loop nature of the course give runners some nice downhills as well.

Held every year since 2006 in early September, the Knossos Half Marathon is a point-to-point race on the island of Crete. It begins at the largest Bronze Age archaeological site on Crete, Knossos and finishes at the Eleftherias Stadium in Heraklion. Participants will have 3 hours to finish the 13.1 miles.

The loop course of the Crete Half Marathon is held in the town of Arkalochori on the island of Crete, known best for the archaeological site of a Minoan sacred cave. The course features rolling hills with a significant uphill just past the mile 4 marker and a steady incline between miles 9 and 11. The early October race features plenty of Crete’s beautiful sites including olive groves and vineyards.

In the port city on the Thermaic Gulf of the Aegean Sea, Thessaloniki hosts a half marathon in mid-October with a start time of 6:45 p.m. The two-loop course runs parallel to the water nearly the entire race and offers views of both the city and sea. Runners will start at Thessaloniki Port Authority and finish their 13.1 mile journey at the White Tower, an Ottoman fortress and former prison.

On the island of Chios, runners congregate in Kampos late August for the Chios Half Marathon. This historical area with old medieval mansions and citrus groves protected by the Ministry of Culture is the backdrop to the 13.1 mile race. In addition to the half marathon distance, the race organizers also offer distances of 10K, 5K, and a 1.5K for children.

The out-and-back course of the Road to Rhodes Half Marathon offers runners incredible views of the Mediterranean as they conquer 13.1 miles. Though the course is mostly flat, there are a few rolling hills in the middle miles as well as near the finish. This mid-April race takes runners by some of the historical sites of Rhodes including the Acropolis of Rhodes and the Castle of the Old Town.

Held in late March or early April, the Olympia Half Marathon is a point-to-point race that starts from the center of Pyrgos and finishes in Ancient Olympia. It is Ancient Olympia that was the birthplace of the Olympic Games, a sporting event that has stood the test of time. Runners will find a mostly flat course with one significant hill near the halfway mark and one ascent towards the end of the race.

Runners traveling to Athens, Greece in late April will want to register themselves for the Poseidon-Athens Half Marathon. This out-and-back, double loop race takes place along the shores of the Mediterranean and allows runners to see sights of the Farino Bay. Racers will have an opportunity to run by the Faliro Pavilion, the Metropolitan Park of Kallithea, the Averof Battleship, the new National Library, and the Peace and Friendship Stadium.

The mid-October Navarino Challenge is located in Costa Navarino, in the Greek region of Messinia in the southwest Peloponnese. Runners will have a chance to see this protected area, shaped by 4,500 years of history as they travel a lollipop-style course. The 13.1 miles is a mixture of mostly asphalt and dirt with a small portion located on sand near the beach. Featuring a few rolling hills and mixed terrain, this a great course for road runners to try a trail race.

Previous post: How You Know You’re Ready to Run a Half Marathon