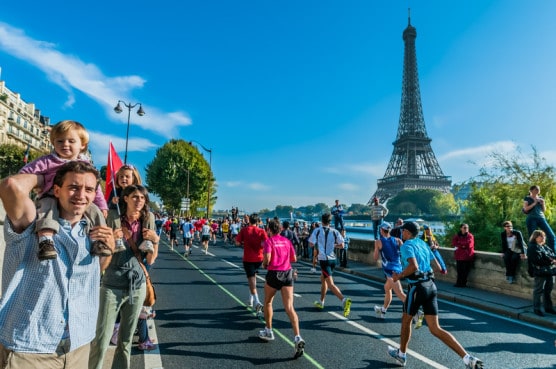 See London the way no other tourist will have a chance to do by running 13.1 miles through the city. Traversing Hyde Park, The Green Park, St. James Park, and Kensington Gardens, this race is full of spectacular views. Royal residences Buckingham Palace and Kensington Palace, the London Eye, and Royal Albert Hall are just part of the amazing scenery of this course.

Attracting some 40,000 participants, this huge event is a perfect introduction to eastern Paris. The loop course begins and ends in Bois de Vincennes, the largest public park in Paris. Runners are treated to historical sights such as Notre Dame, Place de la Bastille, and more than a mile of running along the Seine. Plus, the largely flat course is perfect for setting records.

Running through the streets of a world-class city is bucket list-worthy. Finishing in an Olympic stadium makes this race a must-do. Home of the 1928 summer Olympics, this stadium serves as a picturesque backdrop to cross the half marathon finish line.

Runners get a glimpse of all kinds of things that Amsterdam has to offer from the Rijksmuseum, home of thousands of pieces of art, to Vondelpark, the largest public park in the city.

Situated in the heart of Barcelona, the half-marathon of Barcelona (or Mitja Marató de Barcelona in Spanish), is a fabulous way to see this city. Runners start at the Arc de Triomf and race to the Plaça Catalunya.

They will race down the famous Ramblas, along Avenida del Paral·lel, and through the Eixample district. The second half of the race features views of the Torre Agbar, the Fòrum, and the beautiful Mediterranean before finishing at the Arc de Triomf.

As one of the most picturesque cities in the world, Florence provides a beautiful place to race a half marathon. Runners will get to see a smattering of monuments that has made this city famous, from Lungarno della Zecca to Piazza della Signoria, and from Piazza Duomo to Oltrarno, to the finish line in Piazza Santa Croce. Plus, the whole family can get involved with 1.5K, 5K, and 10K events.

The world famous Berlin Marathon is known for producing incredibly fast times and the half marathon is no different. This PR-worthy course happens to be full of history as well. Runners will pass by the Berlin Cathedral, the Brandenburg Gate, the Victory Column, Charlottenburg Palace, and Potsdamer Platz. Join 30,000 others in this jaunt through some of Berlin sights.

The Rock ‘n’ Roll series is an American brand of racing series, but they have gone on a world tour in recent years. Runners of the Rock ‘n’ Roll Dublin Half Marathon will get to see two different sides of this stunning city.

The first portion of the race takes runners on a journey through the city, crossing over the River Liffey, and heading west through the heart of downtown. The second half is remarkably different, as runners wind through the green space of Phoenix Park. With all there is to see, runners might not even notice the couple hundred feet of elevation change.

The course of the Helsinki Half Marathon provides views of both the city and the water. Nestled in the Gulf of Finland, this seaside city is bustling during the summer months. Runners will pass by the University of Helsinki Botanical Gardens, Helsinki University, Linnanmäki amusement park, and the myriad of buildings built for the 1952 Olympics.

As home to the capital and largest city in Belgium, Brussels is a city full of centuries of history. Runners entering the Brussels Half Marathon will only get a small sampling of the landmarks marking historical events that have taken place over the years.

They will pass by the Berlaymont and Brussels Palace of Justice and run through public parks like Ter Kamerenbos and Parc du Cinquantenaire. This loop course follows sections of the full marathon course which takes place on the same day.

The Copenhagen Half Marathon is like a tour of downtown Copenhagen. Just don’t expect to set any PRs if you are soaking in all the sights. Runners will pass by a slew of famous spots like the National Gallery of Denmark, Rosenborg Castle, the Marble Church, the Old Stock Exchange, the Royal Library, and Frederiksberg Town Hall.

This year (2015) will be the race’s inaugural year in a city that boasts 30 percent of its citizens are runners.