12 Half Marathons That Run Through Tunnels in 2018 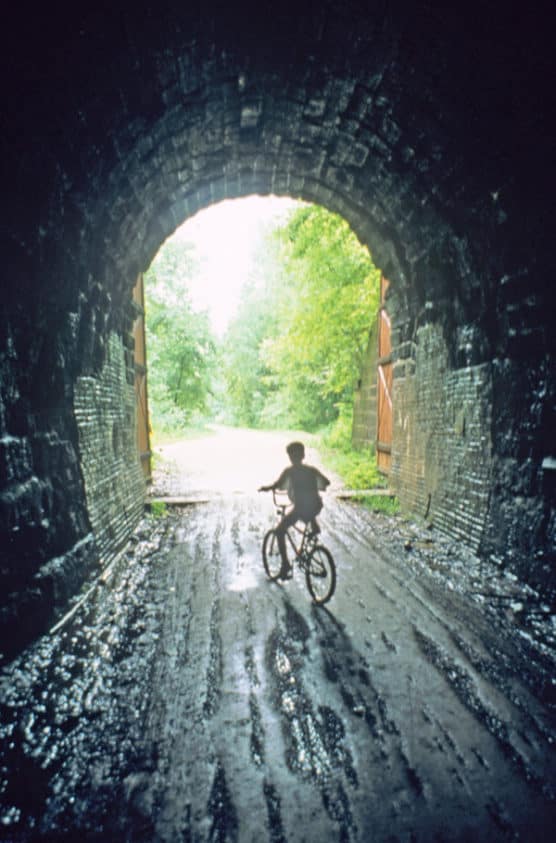 A boy rides a bike through one of the tunnels on the Elroy-Sparta Trail, the site of the Elroy Apple Dumpling Races and the Rails to Trails Half Marathon. (Courtesy Wisconsin Dept. of Natural Resources/flickr)

Combine a run through a desert-like environment, the waters of Lake Mead nearby and the majestic Hoover Dam in the distance — and a run through tunnels along the converted railroad track trail road to and from the dam — and you get a magical race in a special place.

The rugged, hilly terrain of South Dakota’s Black Hills region unfolds along the course at this race, which follows the old Burlington Northern Rail Line along old railroad bridges and through hardrock tunnels, passing by gorgeous, scenic National Forest lands on the way.

Run along a series of trails that take runners through Douthat State Park in the heart the Allegheny Mountains, this race features brief stretches through Rhododendron-covered tunnels that unfold along the trails inside this 4,493-acre Virginia park.

Held every year on the first Saturday after Labor Day in this scenic small Wisconsin town, this race unfolds along an abandoned railroad bed known today as the Elroy-Sparta State Trail, and features a run through one of the old railroad tunnels on the trail after about three miles in.

You’ll run this race entirely along the Great Allegheny Passage, a rail trail that stretches between Maryland and Pennsylvania and features its famed Brush Tunnel, a 914-ft.-long railroad tunnel that you’ll run through 10 times during the half marathon.

Run the “fastest marathon in the West” at this race, which features a pair of 13.1-milers that unfold through California’s Lassen National Forest, with stretches through some old railroad tunnels late in the race — to make sure they’re well lit inside, organizers place miners’ lights throughout each.

7) Rails to Trails Half Marathon

Known for its steady uphill sections early in the race, this half marathon is the second to run Wisconsin’s Elroy-Sparta State Trail, a paved trail with three long tunnels that hikers, walkers, bikers and runners can pass through — one of which runners will run through during the race.

One of a handful of races around the world that can truly be called an international race — its course really does take runners through two nations — this event takes runners underground for a mile-long stretch of the race, between the seventh and eighth miles through the Detroit-Windsor Tunnel under the Detroit River.

Single-track trails, challenging technical trails and stretches through a tunnel and across a river — not just over a bridge, but actually through the water in the river — await runners here at this race in Connecticut’s Steep Rock Preserve.

This old historic town along the southern shore of Kauai, the oldest of the Hawaiian islands, this race takes you past the wide-open fields of the plantations that once operated here — and through its Tree Tunnel along Maluhia Road, a grove of eucalyptus trees planted over a century ago.

For sheer natural beauty and dramatic coastal scenery, it’s difficult to top this race, which will take you through the Custom House Tunnel along Lighthouse Avenue early in the race, lit by brightly colored lights on race day.

The desert landscape of Southern Nevada is on display at this race, which features a run through a number of small tunnels, which originally were constructed as railroad tunnels in the early 1930s to transport men and materials back and forth between Boulder City and the Hoover Dam.

Next post: 5 Obstacles You’ll Face in Training (And How to Overcome Them)

Previous post: 4 Reasons to Stay Local When You Run a Goal Race