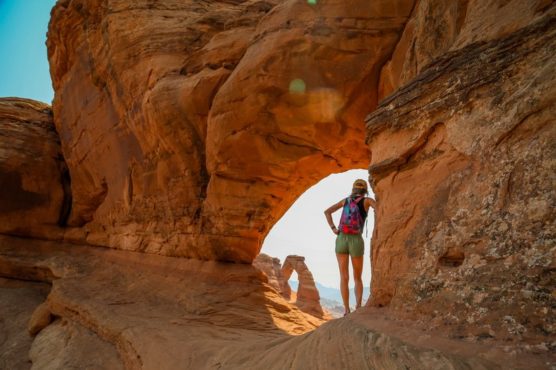 Photo by Strauss Western on Unsplash.

“I’m not saying don’t dream or be willing to work hard. But keep things simple, effective, and within your means. Part of working hard is having the discipline to know when enough is enough. Grow your capabilities over time, not suddenly two months before a big race.” — Meb Keflezighi

Run through a place sometimes called “Utah’s Dixie” at the 38th annual running of this race, which takes runners along scenic paved city trails that unfold alongside the Virgin River. (The nickname has stuck thanks to the area’s warm climate and a failed effort by Brigham Young to grow cotton here in the 1860’s.) Along the looping route, which is filled with twists and turns in the stretches closest to the river, you’ll take in views of red bluffs that look out over the northern part of the city, as well as the edge of the Mojave Desert to the south and Zion National Park off in the distance, and the peaks of the nearby Pine Valley Mountains.

The second in a series of Moab-area trail races known as the “Triple Crown of Moab,” this race unfolds along the southern edge of Utah’s stunningly beautiful Arches National Park, where you’ll get to take in views of towering red rock formations like those in the photo above, as well as the snow-covered peaks of the La Sal Mountains off in the distance. Organizers say the trails are “smooth and easy at points, technical slick rock at others, and there’s even some sand [along the route] to shake things up.” The race starts at about 4,600 feet above sea level and reaches a peak of about 4,770 feet, so while the elevation is high, the climbs aren’t overly challenging.

A gorgeous run through southern Utah’s “color country,” known for its brilliant blue skies and red rock formations, as well as its mild winter climate. From the starting line along Utah’s Old Highway 91, where you’ll begin the race surrounded by red-colored mountains and desert cactus, the race then unfolds through a neighborhood known as Coral Canyon, a roughly 2,600-acre planned community that’s home to a golf course, a number of parks and outdoor green spaces. Later, you’ll run on paved trails through an area known as Hell’s Canyon and a make a steep descent toward the Virgin River, where you’ll run along the boardwalk for a stretch and later cross the finish line at the Staheli Family Farm.

4) The Sun Half Marathon

Perhaps best known for the dramatic natural landscapes of nearby Snow Canyon State Park — whose tall, red rock bluffs tower over the surrounding desert — this half marathon follows a mostly downhill route along Old Highway 91 that starts just south of Utah’s Gunlock Reservoir and finishes in Santa Clara, a suburb of nearby St. George. You’ll get to take in stunning views of southwestern Utah’s canyons, red rock formations and the Santa Clara River as you run, along a course that drops about 480 feet from the starting line (about 3,388 feet) to the finish line (about 2,907 feet).

An awe-inspiring run right up to the edge of Utah’s Zion National Park, whose mesas, mountains, waterfalls, streams, canyons, caves and red rock formations of nearly every size offer some of the country’s most stunning vistas and views, both from high above the rocks and down below in the canyons. You’ll start this point-to-point race in nearby Virgin, a tiny town of just a few hundred residents, and from there run east toward Springdale, climbing some 400 feet along the way.

Set for its 10th annual running next year under the wide-open, brilliant blue skies of southwestern Utah, this race offers up a course that one reviewer described this way: “if you want rock bands and spectators, this isn’t for you. But if you want unbelievable views in a rural setting, this is great!” Run at a time of the year when temperatures should be perfect for running — around the mid-50s — the race starts and finishes in Hurricane, a city of about 13,000 that lies about 20 minutes from nearby St. George, Utah, and about a two-hour drive from the closest big city, Las Vegas. And if you’re up for sightseeing after the race, Zion and Bryce Canyon national parks lie a short drive from here.

A gorgeous and mostly downhill half marathon through Utah’s American Fork Canyon, where you’ll run your first seven miles along the Alpine Loop Scenic Highway, one of the Beehive State’s most beautiful roads. Starting from just below 7,000 feet above sea level at the Tibble Fork Reservoir up in the Wasatch Mountains, you’ll run in the shadow of the majestic Mount Timpanogos down the Alpine Loop toward the city, where you’ll then run through neighborhoods and along the edges of a golf course, before turning onto American Fork’s trail system for the final mile. Proceeds from the race go toward helping cancer patients in the local area with treatments and related expenses. As one reader wrote to us, “I do it every year. It means so much to me that I can run in honor of family members who have had cancer.”

Described by its race organizers as “punishing, unforgiving,” and yet “ridiculously beautiful,” this race is all that and more — with some 1,900 feet of elevation climb in just the first three miles of the half marathon route, which organizers say is a half marathon “plus one,” meaning it’s 14.1 miles instead of 13.1. The race takes runners along what is known as the Ben Lemond and Skyline trails, which climb up the mountains here in the northernmost part of Utah through a series of switchbacks, twisting and turning along the dirt trails within the Cache National Forest, looking out onto Salt Lake City to the south and the mountains of southern Idaho to the north.

Rising red mesas and awe-inspiring canyons provide the backdrop for this race that used to be called “The Other Half,” but now is named for the famed Arches National Park just north of Moab, where you can see some of the most stunning rock formations in the world. From the starting line at the historic Dewey Bridge, runners follow the path of the Colorado River, along paved roads with gorgeous views of the surrounding terrain, including prominent landmarks like the eroded sandstone Fisher Towers, the towering spires of Castle Valley and the peaks of the La Sal Mountains in the distance.

Surrounded by red rock cliffs and sand dunes that tower over the desert floor, the trails and roads within southwestern Utah’s Snow Canyon State Park are the scenery for this breathtaking half, which Runner’s World has called one of North America’s best. The point-to-point route starts at the trailhead for the Red Mountain Trail, one of more than 30 miles of trails within the 7,400-acre park, and from there it follows a mostly downhill route along Snow Canyon Drive. Throughout the course, you’ll run through a place where “majestic views and the subtle interplay of light, shadow, and color dancing across canyon walls evoke strong emotional responses from visitors.”

One of Utah’s most popular races — organizers say the “canyons around Moab are unlike anywhere in the world, and this course conquers some of the most spectacular” — the Moab Trail Half actually is two half marathons, one on Saturday and one on Sunday, both of which run along the same course. You’ll run through Pritchett Canyon, a place filled with stunningly gorgeous red rocks and sheer canyon walls, and then climb up Kane Creek Road before your descent onto the hard-packed single-track trails along the creek. There’ll be a few sections that take you through knee-deep water (which may be higher, depending on the weather before race day) but the views make it all worth it.

One of the most awe-inspiring (and most photographed) places in America, this desert region along the Arizona-Utah border is filled with towering sandstone buttes, some of which stand more than 1,000 feet high. You’ll get to take it all in at this stunning race, which organizers say will unfold “through some dramatic, rarely seen landscapes” in the Monument Valley backcountry, along a combination of dirt Jeep roads and sandy trails. The race takes place inside the Navajo Nation’s 91,000-acre Monument Valley Tribal Park, at just over 5,500 feet above sea level — so be ready for a high-elevation race.

Tagged as: Utah Half Marathons