13 Half Marathons By Rivers That’ll Inspire You 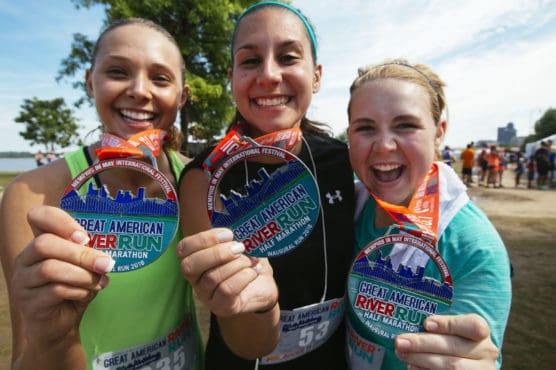 Run on paved and natural surface trails, this race is actually two races, with different courses for runners and walkers. Both share the same starting area, but proceed in opposite directions along the American River Parkway, a 30-mile-long park along the river.

The serene, peaceful beauty of North Carolina’s Blue Ridge Mountains awaits at this race, which unfolds almost entirely along the New River, located about 100 miles from Asheville and within a short drive of resort towns like Boone and Blowing Rock.

Run in both the spring and the fall, the Potomac River Run is virtually flat for the entire out-and-back course, which unfolds along the Chesapeake & Ohio Canal towpath. Shaded, tree-lined and scenic, the race also features a forgiving 6-hour time limit.

Stretches along each of the three rivers that meet in Pittsburgh — the Ohio, Allegheny and Monongahela — are a big reason why more than 10,000 runners come out each year for this race, which features five bridge crossings.

You’ll spend much of the first few (and last few) miles of the course along the Seekonk and Providence Rivers at this race, which includes stretches through downtown Providence and two bridge crossings — one on the way out and on the way back.

You’ll run the entire race along the Hudson River at this early May event, which unfolds through New Jersey’s Palisades Interstate Park. The park features 2,500 acres of wild, pristine forests and shoreline, with high cliff walls overlooking the river.

This point-to-point race, which starts at a park overlooking Boise’s Luck Peak Lake, unfolds along trails and roads that look out onto the Boise River for much of the race, and follows a gentle, very gradual downhill descent from start to finish.

Set for Sunday of Memorial Day weekend, this race unfolds with plenty of stretches both along the Mississippi River and through the heart of downtown Memphis, taking runners past some of the most important sights in American culture and music.

Des Moines’ Dam to Dam races offer some of the flattest terrain and most scenic views that Iowa’s capitol city has to offer, with a race that starts at one dam outside the city and crosses over another in the heart of downtown.

This race takes runners through portions of the Chattahoochee River National Recreation Area and Morgan Falls Reservoir, along a combination of park trails and roadways that run alongside the Chattahoochee, which flows into and through nearby Atlanta.

Part of a series of races across the Southeast, this event starts and finishes in front of the Clinton Presidential Library and Museum along the Arkansas River, and keeps runners along the river for the entire out-and-back course.

The majestic redwood forests of Northern California’s Humboldt Redwoods State Park serve as the backdrop for this race, which marks its 39th annual running along a course that takes runners along the Avenue of the Giants highway.

You’ll start and finish this race across the Mississippi from New Orleans in Gretna, and from there you’ll run toward the Gulf Intracoastal Waterway, and then back along the banks of the Mississippi, where you’ll finish running along the river levee.