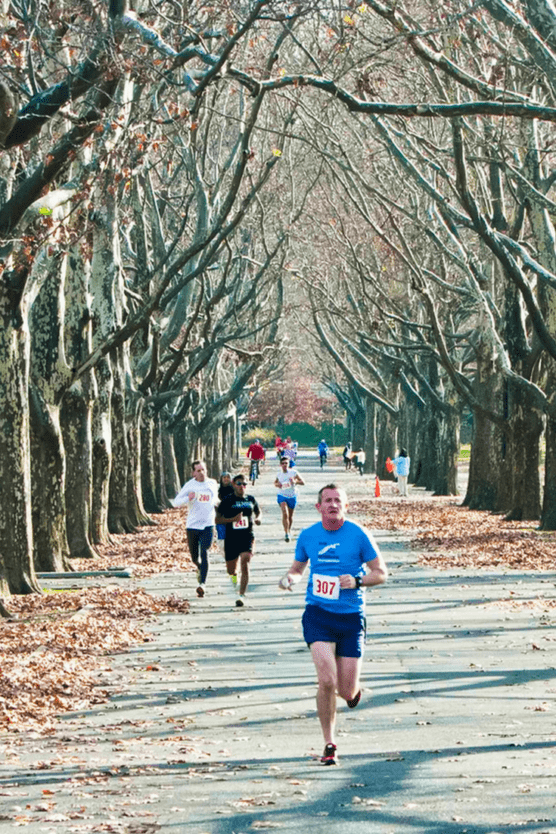 The trails and park roads that wind through Youngstown’s Mill Creek Park await runners at this often-snowy race, which starts at $32.


2) City of Seneca Half Marathon

Nestled among the foothills of the Blue Ridge Mountains here in upstate South Carolina, this small city plays host to the 8th annual running of its half marathon, which starts at $50 until the race, when the fee goes up to $60.

3) Running the Shoals Half Marathon

Set for its 5th annual running along the golf cart paths that wind along the tee boxes, fairways and greens of The Shoals, a 36-hole golf course tucked in Alabama’s northwest corner, this race starts at $45.

Run along a backdrop that combines gorgeous natural vistas with views of San Francisco’s urban skyline in the distance, as well as a hilly and challenging course, this race starts at $50 for the 13.1-miler and also features a full marathon and 10K.

Set for its 30th annual running here along the Deschutes River, a place where salmon and steelhead make their annual migration upstream, this race starts at $35.

You’ll run among the hills, trails, military landmarks and dramatic coastal shorelines of Northern California’s Golden Gate National Recreation Area just across the bridge from San Francisco at this race, which starts at $50.

Set for its inaugural running along the Lehigh Gorge Trail here in this charming small town in eastern Pennsylvania, this all-new half in the “Switzerland of America” starts at $50.

Run the soft country highways just outside this tiny city in central northern Kansas (population: 100) where every finisher will go home with a chunk of limestone, a race that starts at $10.

With more than 30 miles of trails that wind through its 2,000 acres among in the hills of northeastern Kentucky, Carter Caves Resort State Park is the home of this new half marathon, which starts at $50.

Set for its first-ever running with the half marathon distance, the Sri Chinmoy 5K adds a 13.1-miler this spring that starts at $35, on a course that runs through Flushing Meadows Corona Park, where the tennis U.S. Open is played every year.

This race offers runners the chance to run 13.1 miles and make a contribution to a great cause, as proceeds from the race will go to support the Pulmonary Hypertension Association and the National Multiple Sclerosis Society — fees start at $40.

Making its 32nd annual running this spring through the streets of this small city in Central Michigan that’s also the home of the Dow Chemical Company, this half starts at $36.

The serene, peaceful beauty of the western North Carolina Blue Ridge Mountains is on display as the New River races make their 8th annual running along the banks of the river of the same name this summer, starting at $50.

Set for its first-ever running with the half marathon distance this year, the Wadsworth MatchStick Challenge is an evening run through the parks, neighborhoods and business district of this small city in northern Ohio, and starts at $35.

Run here in this tiny town in southwestern Colorado that’s known as the “Gateway to Mesa Verde” — it’s just down the road from the entrance to Mesa Verde National Park — this half marathon features views of the mountains all around and starts at $50.

Billed by race organizers as the “highest downhill half marathon in the country,” this race starts at 10,630 feet above sea level and goes entirely downhill, descending by the end of the race to 8,400 feet. Fees start at $45.

Part of a series of trail runs that take place in parks and forests up and down the California and Oregon coasts, this race takes runners through Henry Cowell Redwoods State Park, a park that’s filled with a centuries-old grove of redwood trees. Starts at $45.

Nestled among the hills east of Oakland and home to one of the Bay Area’s largest natural stands of coast redwood trees, Redwoods Regional Park plays host to this all-new race that starts at $50.

19) Georgetown to Idaho Springs Half Marathon

Set in the Rocky Mountains just outside Denver, this race takes runners through what is certainly some of the most scenic road race terrain anywhere in the United States, and starts at $50.

You’ll run along the banks of the Providence River at this race, which features largely fast and flat terrain on both roads and bike paths, with gorgeous views of Narragansett Bay and the neighborhoods of this city throughout. Starts at $42.

Slightly longer than most other half marathon races — with 13.2 miles of up-and-downhill trail running through the deep hardwood forests of West Virginia’s New River Gorge National River area, this race starts at $40.

Standing at 3,849 feet above sea level, Mount Diablo offers one of the toughest challenges of any trail run among the many parks and mountain peaks here in the San Francisco Bay region. Starts at $45.

Set for its fifth annual running this year along the streets of this small city just north of Janesville and located near the southern edge of Wisconsin’s Kettle Moraine State Forest, this race starts at $50.

Take a downhill run through the mountains of southern Utah just outside Capitol Reef National Park and Grand Staircase Escalante National Monument at this race, which starts at $40.

Get ready for a run through the canyon country of southern Utah, a region known as “Panoramaland” for its stunning scenery of red rock formations, canyons and mountains at this race, which starts at $50.

Set for its 6th annual running along the Shore Road Promenade that looks out onto the waters of New York’s Upper Bay from Brooklyn’s Bay Ridge neighborhood, this race starts at $50.

Run in the heart of the fall season and planned as a fundraiser for the locally based Forest Lake Area Trails System — hence the nickname, the “F*L*A*T*S” Half Marathon — this race takes runners through Thousand Hills State Park and starts at $40.

You’ll run the trails that surround this small town nestled in the foothills of the Sierras of Northern California, with gorgeous views of the surrounding mountains and canyons, less than an hour’s drive from the state capital in Sacramento.

Set for its 6th annual running along the single-track trails that wind through Pennsylvania’s Poe Valley State Park, which lies roughly a half-hour’s drive from Penn State University, this race starts at $40.

Run the fast (and very flat) crushed limestone and dirt trails that make up the Three Eagle Trail, built on an old railway line that stretched between the cities of Eagle River and Three Lakes, at this race, which starts at $40.

Runners get to enjoy a fast, flat road race with beach and oceanfront views at this race, which welcomes both runners and walkers for this race along the Jersey boardwalk. Starts at $50.

Next post: 13.1 Wine Country Half Marathons Across the USA

Previous post: Here’s What to Eat During the Week Before Race Day